A SIGNIFICANT change of transport policy is happening at Heathrow Airport: the introduction of a 200-car fleet of Jaguar I-Pace electric car chauffeur fleet.

The landmark deal has been signed by Heathrow, Jaguar and travel services company WeKnowGroup. It will create the largest chauffeur-driven fleet of electric vehicles in the UK and support Heathrow’s commitment to improving air quality around the airport.

Initially the fleet will be made up of 50 I-Paces available with the option to add a further 150 cars in the next 12 months.

The fleet is expected to support up to 1,000 electric vehicle journeys to and from Heathrow each day – saving over eight tonnes of oxides of nitrogen (NOx) emissions each year. To support the service, WeKnowGroup will be installing a dedicated charging hub at Heathrow, which will be the largest in the UK.

The announcement comes as new research released by economic consultants CEBR today (May 08, 2018) has revealed the extent of forecasted EV take-up in London over the next decade and its predicted positive impact on air quality, given the impact road vehicles have on NOx emissions.

Following a number of announcements by car manufacturers, Government and the Mayor of London, the CEBR analysis shows that by 2030 up to 58% of vehicles on London’s roads will be electric.

The introduction of the T-Charge for more polluting vehicles in October 2017, the Ultra-Low Emission Zone and falling purchasing costs for an electric vehicle are some of the main causes driving forward this forecasted shift, which will could result in the average concentration of oxides of nitrogen (NOx) across the city reducing by as much as 8%.

Consumer research run in parallel with this study shows that by 2028, 63% of Londoners will feel comfortable making the switch to an electric vehicle, with falling purchase costs and an expansion of the charging point network likely to fuel widespread adoption. Londoner-based travellers to Heathrow 32% said they would be fairly likely (22%) or very likely (9%) to use electric taxis to access the airport if these were made more available.

“What we have created in the Jaguar I-PACE is utterly revolutionary; a desirable, luxurious and state-of-the-art electric vehicle that’s practical for genuine everyday use, including the tough life of an airport luxury chauffeur car.”

Heathrow already has one of the largest corporate electric vehicle fleets in the UK, and the highest density of charging infrastructure in Europe, and is taking further action to promote the take-up of EVs in and around the airport.

This includes a year-on-year increase in more electric vehicle charging points through a £5m investment, the trial of electric buses for airside passengers and plans for an ultra-low emission zone airside. Heathrow has also signed up to EV100 a global initiative bringing together forward-looking companies committed to accelerating the transition to electric vehicles. 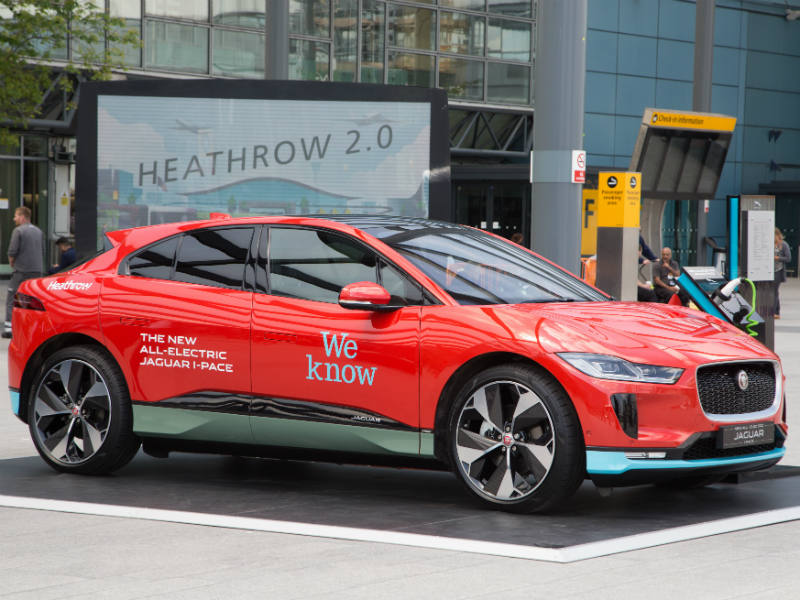 The Jaguar I-Pace in brief

Jaguar says that on average a chauffeur vehicle drives around 114 miles per day, which will allow the I-Pace to  complete a whole day’s driving on a single charge – even with passengers, in winter and with motorway driving. With the ability to charge at 100kWh, the Jaguar’s battery can be replenished from 0% to 80% in just 40 minutes.

The I-Pace is also already compliant with London’s January 2020 ‘zero emissions-capable’ requirements for private hire vehicles. With fewer moving parts than a traditional combustion-engined car, there are reduced running costs. Service intervals are set at two-years/ 21,000 miles meaning less down time and reduced costs for operators.