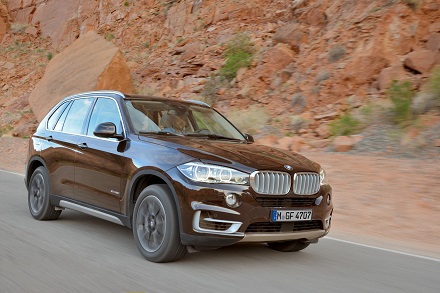 BMW has unveiled the third-generation of its X5 luxury SUV.

The new BMW X5 will be more company car tax efficient than before which should please directors of SME firms.

For the first time, the BMW X5 will be available with a small four-cylinder diesel engine, and not all cars will be fitted with four-wheel drive. All-wheel-drive cars will, as before, be designated as xDrives, whereas two-wheel drive cars are sDrives.

Alongside the entry-level two-litre diesel that will power the sDrive25d and xDrive25d models, there’s a three-litre straight-six diesel producing 258PS (xDrive30d), 313PS (xDrive30d) or 381PS (M50d). There’s a single petrol engine, a 4.4-litre V8 delivering 449PS – that goes into the xDrive50i.

All engines meet the forthcoming EU6 emissions standard, thanks, in the case of the diesels, to a nitrogen oxide (NOx) absorber catalyst, Selective Catalytic Reduction and an AdBlue urea injection which turns most of the NOx in the exhaust to nitrogen and water.

The entry-level sDrive25d, with expected CO2 emissions of 149g/km and combined fuel consumption of 50.4mpg, promises to be the most tax-friendly version of the new X5 – those figures are helped by the new car’s reduced weight and aero tweaks as well.

There are enhancements to the ConnectedDrive system, and the scope for buyers to personalise their cars is also increased, although BMW has played it safe and not changed the X5’s exterior design too much.

Mercedes set a precedent for putting a small, efficient four-cylinder diesel in a big SUV with the latest version of the M-Class, and it is now common for SUVs to be offered without four-wheel drive – even traditional off-road specialists Land Rover and Jeep offer two-wheel drive cars now. For business car drivers who want the space and presence of an SUV but don’t need 4WD it makes a lot of sense.

The new X5 range goes on sale in the UK in November, and prices are expected to start at £42,590.