The 10th-generation Civic which represents a significant step forward for Honda in the C-segment, benefiting from the largest single model global development programme in the company’s history.

The Civic is a core model for the brand in Europe and has been at the heart of its sales and manufacturing heritage in the region. 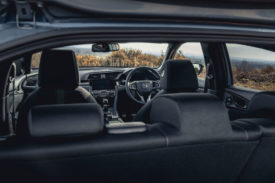 Why would you want a Honda Civic? 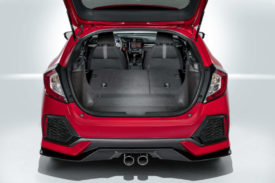 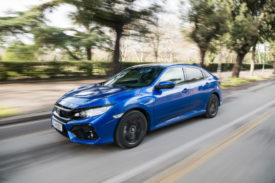 Verdict on the Honda Civic

What just happened to the Honda Civic? Past models have come across as rather bland – with the notable exception of the Type R – but the latest version looks the business.

The two models we tried, not only look the business but can do it as well.

While there is still a certain amount of nervousness about diesels, Honda’s 1.6 unit is as good as you will find under the bonnet of a VW or a Ford while the new nine-speed automatic transmission adds another dimension.

The gearbox has smooth enough shifts and nine ratios means that it can keep the revs nice and low. That’s good news because diesels can become a bit raucous as the revs mount.

It shifts up around the 2,250rpm point and once on the motorway you hardly know you’re in a diesel which makes for a relaxed drive.

It offers good throttle response and strong mid-range delivery while remaining quiet and smooth at low and medium revs.

Sport trim brings adaptive dampers, sporty styling and a centrally mounted sports exhaust and its quite engaging toi drive although not as dynamic as some in the segment.

You can, however, get along at a pace with precise steering, good grip on the corners, nice body control and, best of all, excellent ride quality.

You can select a Dynamic mode and the ride becomes tauter but still rides the bumps well.

What you will find across the range is that the Civic has grown, as pretty much all cars in this segment have as the D-segment continues to dwindle.

Inside, you sit lower in the driving seat than before with more headroom, thanks, apparently to the re-siting of the fuel tank. There is a much more modern dashboard and a more “expensive” look while there a new 7.0in touchscreen infotainment system.

Material quality is high with a soft-touch dashboard pad while  plastics are otherwise mostly hard. Switchgear feels solid but the button consoles could be arranged better.

Passenger space in the back is good with plenty of leg room and head room while boot space is close to the top of the class at 478 litres with the back seats in place.

What else should you know about the Honda Civic?