Following the i3 and i8, this is BMW’s first electric SUV – and electric is what every one is talking about. With more and more fully electric models taking to the road, how does this one stack up?

Maybe a bit of a surprise is that the X3 in petrol, diesel and hybrid form, is BMW’s best-selling car. The electric version has been added to the existing hardware so outwardly little looks different from the rest of the range which was recently facelifted.

What is different is the 282bp, 74kW electric motor which is not the biggest around but it does have a WLTP range of 285 miles – but we’ll come to that later. 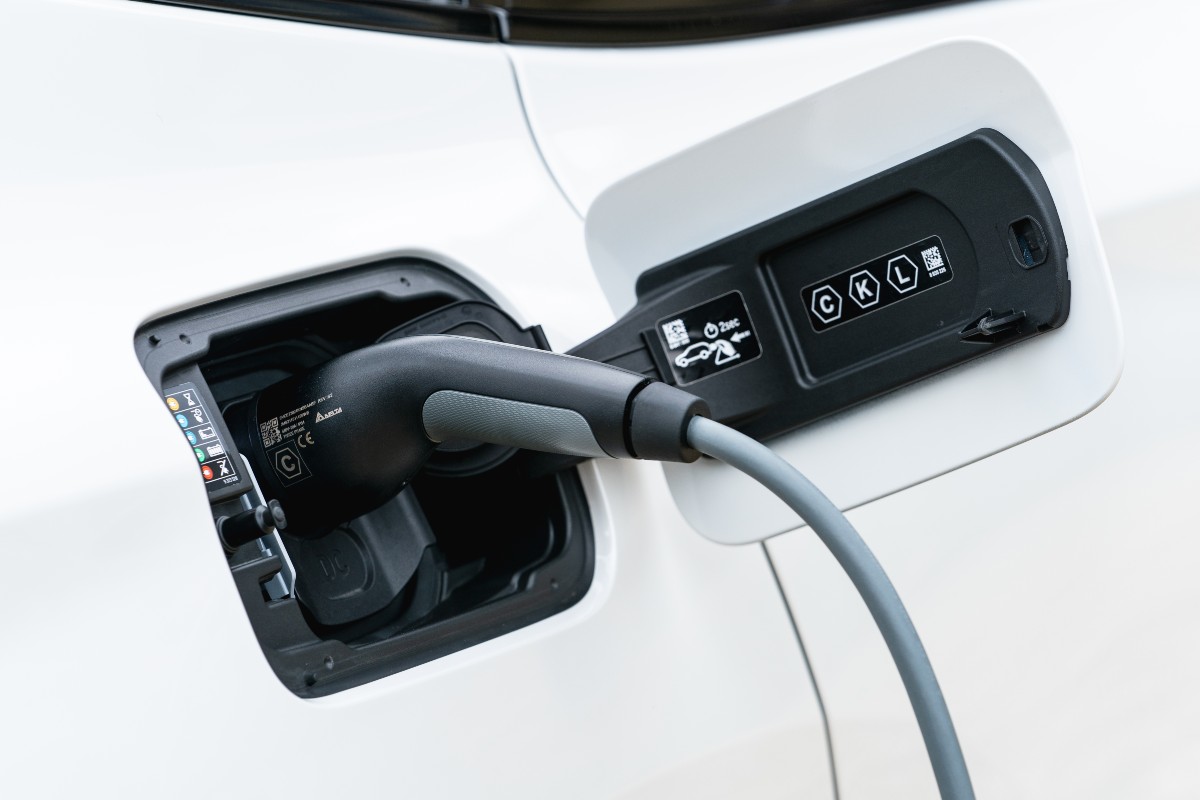 This is BMW’s latest generation of battery, electronics and motor. The battery has much improved energy density allowing more ‘oomph’ from a smaller size.

It’s a BMW so some things are a given. Smart looks, comfortable and practical interior and great to drive.

With the iX3, the German brand has fettled its existing model to accommodate the battery pack. This is placed below the floor which has an effect on interior space as well as reducing ground clearance – which is not entirely ideal with an SUV/Crossover, but compromises are only to be expected when adapting an existing model .

Then again, there’s many people who want a crossover just for the high riding position rather than for off-roading. Also, the electric model is front drive only and there is no front ‘boot’ as found on many rivals now.

Behind the wheel, the iX3 feels surprisingly normal for an electric car. It is not capable of the whiplash, instant torque, acceleration of many rivals – mainly because there is only 282bhp and 295lb ft of torque trying to shunt over 2.2 tonnes – but that’s not a bad thing.

Power comes in smoothly even under full throttle and actually, a 0-62mph time of just under 7 seconds is not too shabby. Top speed is 112mph.

The car’s automatic regeneration system is pretty clever. It takes signals from the sat-nav to anticipate junctions, tight bends and speed limits while the radar sensors pick up traffic speeds in front. This means that when you lift off the accelerator the system sets the regeneration level to try to slow you smoothly down.

If there’s nothing untoward ahead the system will allow you to coast without slowing you down too much. It feels odd at first but you soon learn to trust it.

You can also flick the ‘gear’ lever into single pedal mode, increasing the regeneration when you lift off the throttle.

The ride is supremely quiet although the top-spec Pro versions come with an in-cabin sound generator – an electronic hum that rises and falls in pitch and volume as you change speed.

All in all this is a very relaxing car to drive with nicely weighted steering that gradually stiffens up as the speed rises and the ride soaks up the potholes nicely. 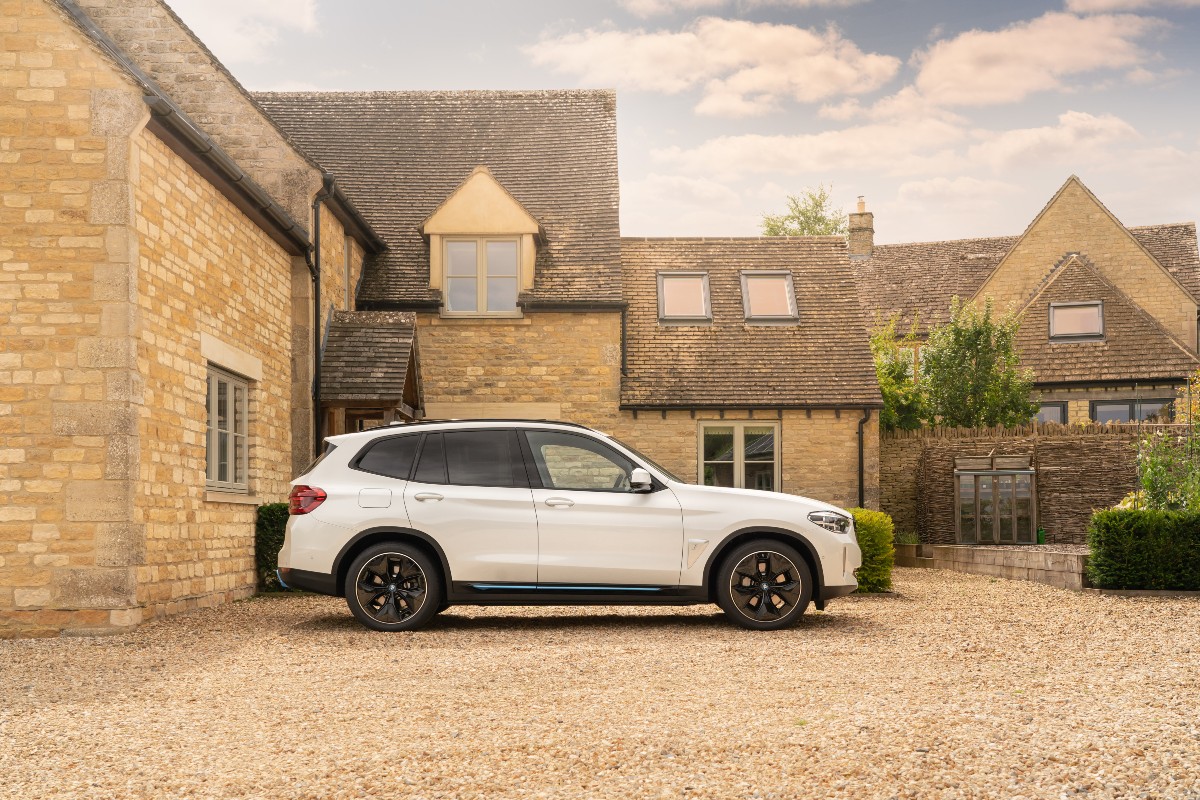 As for the range, this is what I found largely confusing. Using my 7.kW home charger I could not seemingly persuade the iX3 to fully charge to more than 198 miles. However, once out on the road the range started to increase showing, at one point, 220 miles before we started hitting the Dorset hills.

BMW reckons that you can add 180 real world miles in half an hour with a 150kW charger. I never had the opportunity to max the range out on a long enough run so I don’t know if this was an anomaly in this particular test car, or whether it’s an actual ‘thing’.

Inside the car we do start to see some of the compromises involved in creating an EV out of an existing platform/model. There’s not a lot of room in rear but there is a long rear overhang allowing quite a big boot with 510-litres of room. 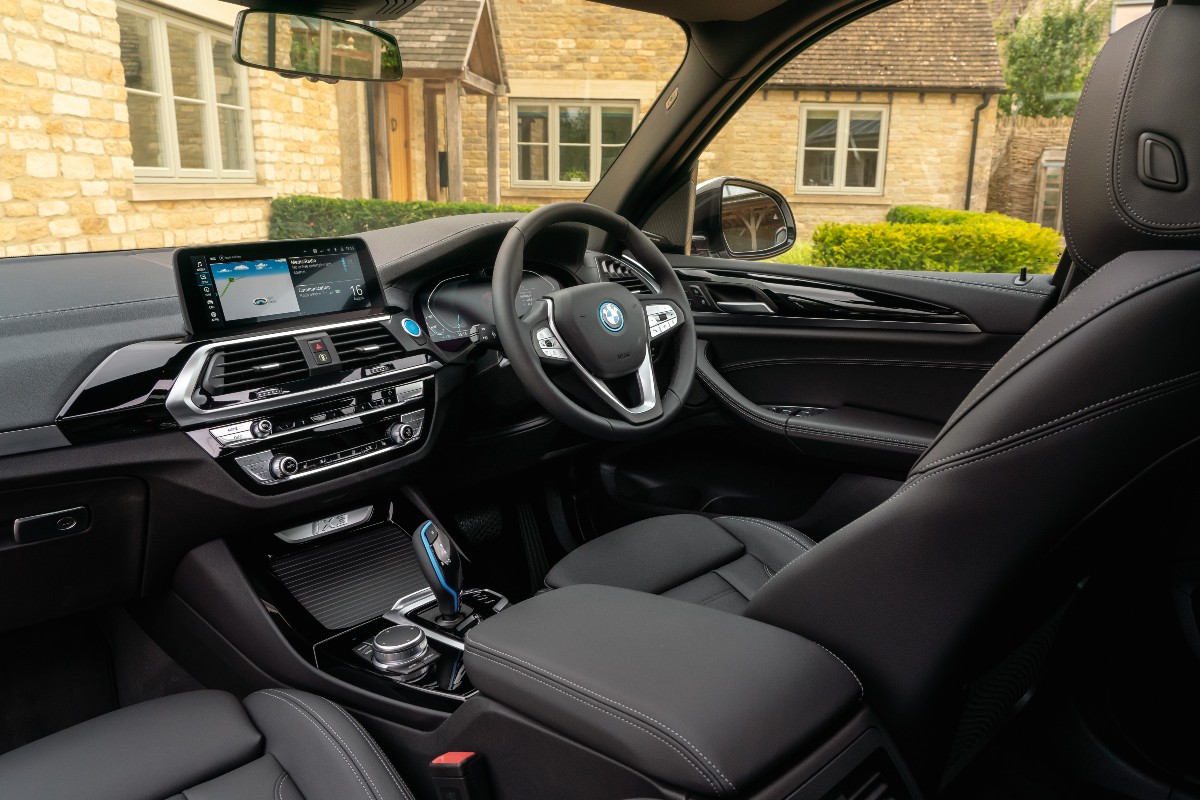 As ever on BMWs, there’s a lot of technology available and the brand has come a long way in reducing the amount of switchgear and dials over the years. It’s all easy enough to use with proper knobs and buttons to control climate and driving modes and assists. The temptation to shoehorn all the functions into a touchscreen has thankfully been resisted.

Everything is kept pretty simple although you can go deeper into the car’s systems and settings by using the infotainment screen.

While standard equipment levels are high, there is an options list which, according to BMW, has been ‘carefully curated’. This may be as a result of the current semiconductor shortages, so more may become available in time.

BMW also gives figures on full-life CO2. For example, run the iX3 on green electricity will see a reduction of 60% in CO2 over the equivalent diesel version. Even the cobalt and lithium are fully audited for fair production.

The iX3 has been real pleasure to drive and we are increasingly coming round to the benefits of electric driving. Range anxiety is not what it once was but it still lurks in the background.

For us, this anxiety is eased further thanks a home charger courtesy of Project EV, but it is not an option available to everyone, especially if you live in an apartment block in the centre of town.