Skip to content
Home/Car news and reviews/News/Electrifying your fleet? We look at three battery electric vehicles

Electrifying your fleet? We look at three battery electric vehicles

There are signs that fleets are moving towards electrification so what’s around, what are the benefits and what are EVs like to drive?

We are running a number of vehicles over the coming months and will help provide some of the answers to those questions.

Having had a look at a plug-in hybrid (PHEV) we turn our attention to battery electric (BEV) with three models: Renault Zoe, Seat Mii and Nissan Leaf.

Research into the Society of Motor Manufacturers and Traders (SMMT) vehicle registration data by Cornwall Insight shows Battery Electric Vehicles (BEVs) in 2020 have already grown 76.1% on the whole of 2019.

Katie Hickford Analyst at Cornwall Insight said that during COVID-19 lockdown there has been a backlog of already ordered vehicles that will have contributed to this increase. It is also likely that EV sales have been bolstered over the summer months by pent-up demand.

“However, this is not the only factor allowing us to see such a growth in BEV sales, with the Benefit in Kind company car tax change, making BEVs more financially attractive,” she added.

“Some initial research from the AA found that EVs may be a popular choice with those wanting to maintain the improvements in air quality brought about by lockdown. It is possible that COVID-19 could positively increase consumer demand impacting EV sales.”

Even though EVs are coming down in price and ranges are getting longer, there are still concerns: there are still not enough charging points around the country, too many different charge point providers, both of which add to range anxiety.

Then there’s cost – EVs remain more expensive than conventional models and while they can go much further on a charge than they used to, it still takes time to charge a vehicle up.

The Nissan Leaf is probably the best known of the trio we tried. It has been around for some time now and is now readily available on the second hand market. In fact it has been winning awards based on its appeal as a pre-owned car.

Such recognition will provide reassurance to fleet customers that the car is exceptionally well-regarded and highly sought after in the second-hand market. 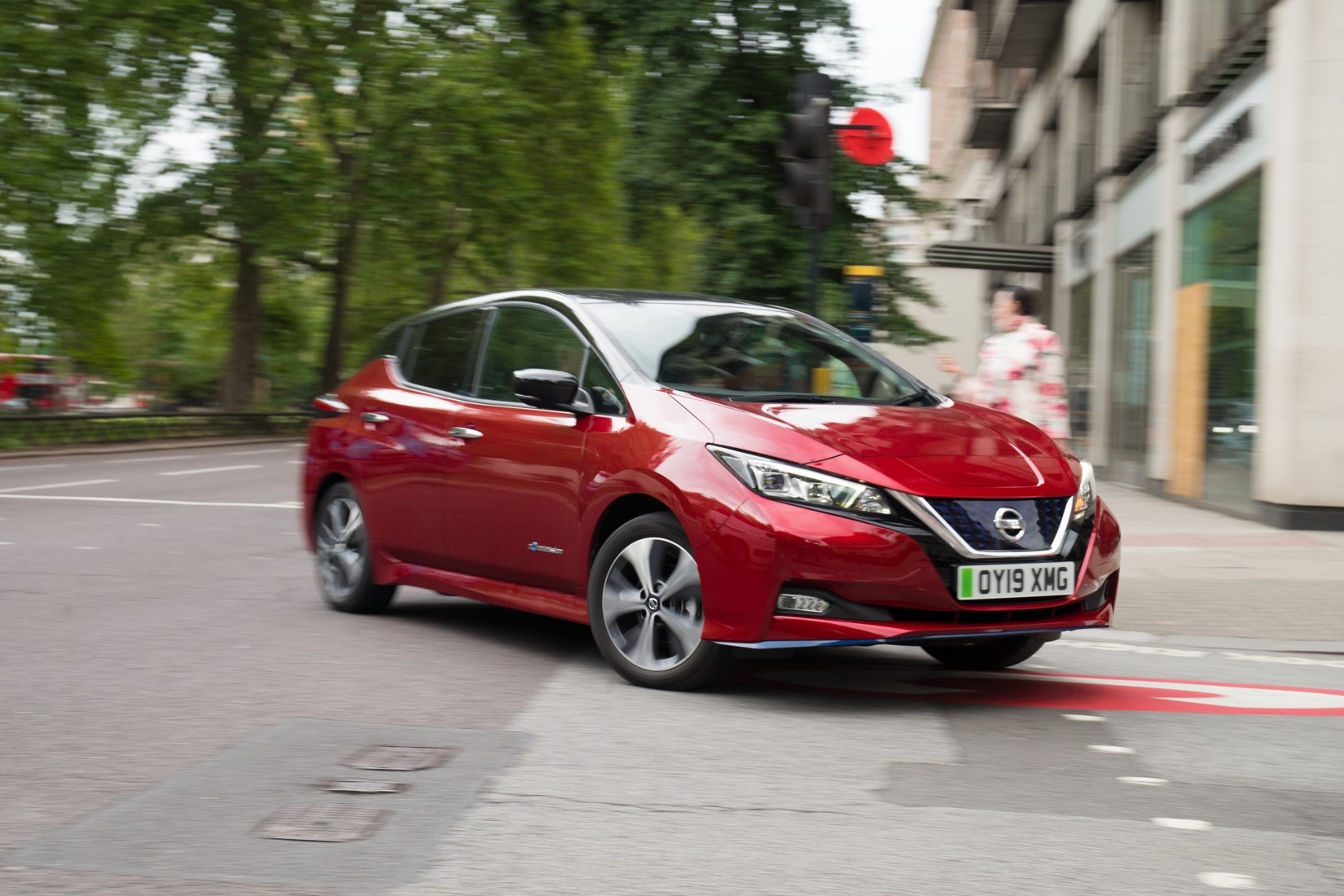 “It’s worth noting that UK fleets have increased their purchases of battery electric vehicles three-fold since April and we’ve seen a massive increase in interest on both new and used Leaf.

“Really positively within this sales mix, the majority of the demand has come from company car drivers and government institutions who typically hold the vehicle for three to four years.

“The effect on our own remarketing is clear. There are fewer examples of Leaf in the young used market, there’s a big appetite to purchase the small number of vehicles available and they’re only dwelling a few days before sale. Our own remarketing performance has improved against last year’s relative position to CAP Clean by three percentage points.”

The Nissan Leaf is the most transacted vehicle in the UK pre-owned EV passenger car market, so has one of the most robust and predictable valuations. However, over the last six months Nissan reports a significant improvement in these used values generated from wholesale remarketing efforts.

Demand for second-hand examples of Leaf significantly outstrips supply. Every Nissan dealer in the UK is fully on board with the manufacturer’s LEAF remarketing strategy and an attractive finance offer is currently adding to its desirability.

The Leaf has certainly moved on from the original model and so has the range, you can now expect 200+ miles. There’s also improved connectivity along with more driver aids.

The motor remains the same but it has a new inverter which supplies and controls the electricity going around the car. It is now more powerful, developing 150bhp, and a 0-62 time of 7.9sec.

The battery is the same physical size as it always was, but new chemistry and management means it has a capacity of 40kWh, hence the additional range.

The latest Leaf feels refined enough, largely because of its silent running. Our test model came with Nissan’s e-pedal, which when switched on, negates the need to use the brakes – unless in an emergency – as the car slows to a stop one you lift off the accelerator.

The braking action is quite stark and a surprise at first how quickly the car slows. It takes some getting used to but as an old-fashioned boy I preferred to switch off and drive conventionally.

Renault’s Zoe is also one of the original EVs – it’s been around for a decade – and again it has moved on considerably in looks and range. The latest model goes some way to addressing two of the most common complaints about EVs – high price and range. 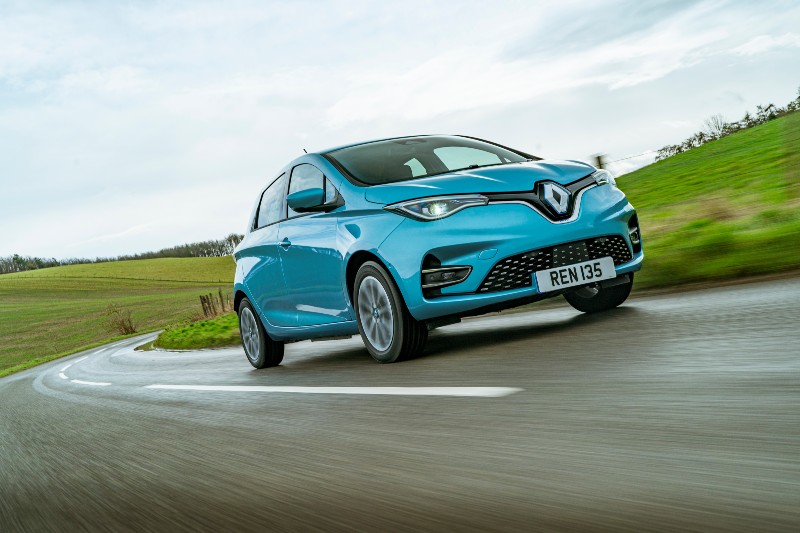 The Zoe has around 200 miles in store on a full charge and costs than most rivals. It comes with plenty of standard equipment, including a wall-mounted 7kW charger installed at your home. The 2020 model now provides a choice of two power outputs, a longer range between charges, a smarter interior and an infotainment upgrade.

You can pay extra for the ability to use rapid 50kW CCS charging points, which allow the car to be charged from 0-80% in just over an hour. A regular 22kW public charger will take around three hours to fully charge and just over nine hours for a full charge using the home charging point.

The Zoe is available with either a 107bhp or 134bhp electric motors. The hilly Dorset countryside round where I live provided a useful insight into the foibles of an electric car. 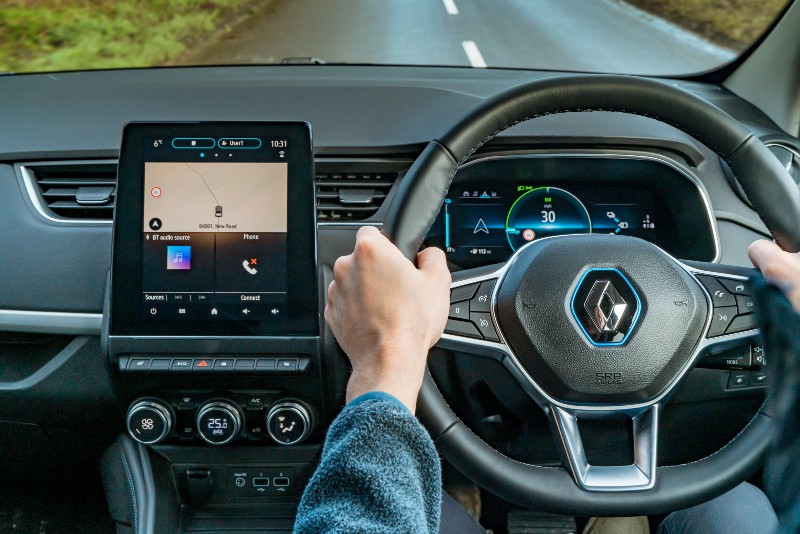 Heading upwards, the juice starts to drain very quickly, but don’t despair, you get it back on the way down thanks to the regeneration of the battery on cruise and braking.

In fact, on one regular round trip from the house up to Hardy’s Monument – elevation 143 meters or 470ft – I gained one mile in range by the time I got back to the house!

Finally, we had the Seat Mii, a relative newcomer in EV terms against the other two. It’s born out of the Spanish brand’s Mii city car with the petrol engine removed and an electric motor installed in its place. 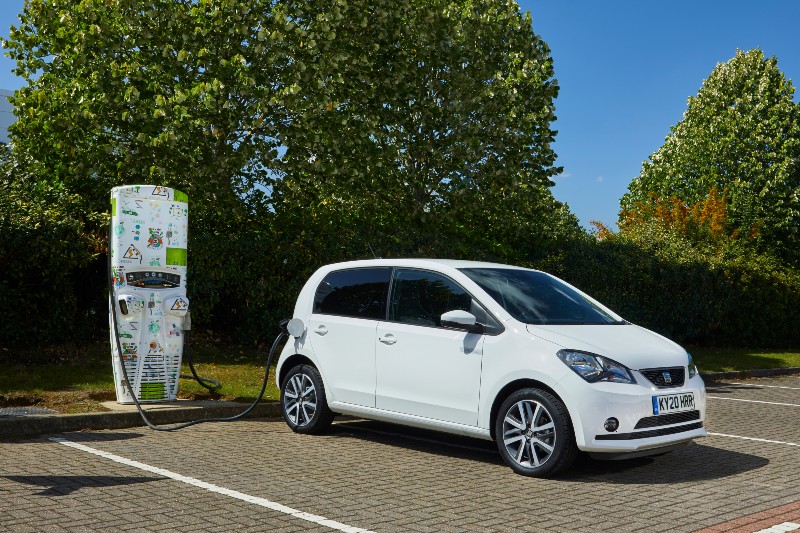 This is the smallest and least roomy of the test trio, although it did carry four adults easily enough. It also has less range than the others so perhaps less appealing as a company car. Its 36.8kWh lithium ion battery has a range of 161 miles on a full charge, according to the WLTP test cycle nd it is one of the cheapest EVs on the market.

The electric motor delivers 82bhp and 156lb ft of torque, not massive, but certainly enough for around town and will get you off the line at the traffic lights pretty swiftly.

It has three driving modes: Normal, Eco and Eco+. Normal offers maximum power while the others limit it in order to maximise range – Eco+ switches the air conditioning off to conserve juice. 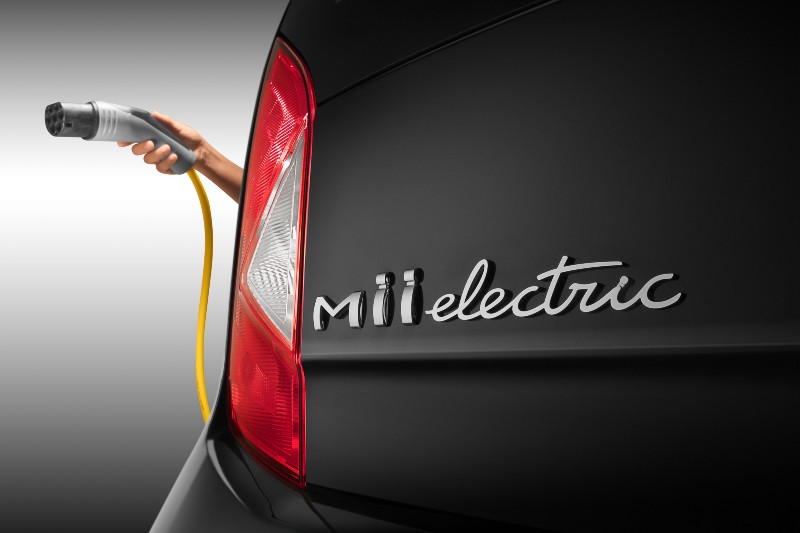 Regenerative braking can also be controlled via the gear selector. In its highest setting, the braking force delivered when you lift your foot off the accelerator is strong enough to bring the car to a near standstill.

There are, however, Government grants available. Since March 2020 those making the switch to electric cars will be eligible for a grant of up to £3,000, excluding cars costing £50,000. There are also grants of £350 towards the installation of home charging points.

The other big advantage, of course, is zero BiK.