Skip to content
Home/Car news and reviews, Ford Reviews, News/Ford S-Max – fun for all the family

Ford S-Max – fun for all the family

It’s an MPV or people carrier – you don’t see many of them around these days as they’ve been overtaken by SUVs and crossovers as the weapons of choice for families.

It’s good to see that a good old MPV still exists and from the outside and in there’s a strong Renault Espace vibe from the Ford S-Max. No bad thing, the Espace was the daddy of the genre.

Is there still room for such a vehicle? I think so, the S-Max offers a lot of space and flexibility that many an SUV or crossover would struggle to match.

Originally launched 16 years ago, the S-Max has stood the test of time and is now in only its second generation. Three engines are available, two diesels – both 2.0-litres, one with 148bhp and the other with 187bhp. The lower powered diesel comes with front-wheel drive and either a six-speed manual or an eight-speed auto, the more powerful motor gets the option of all-wheel drive and the eight-speed as standard. 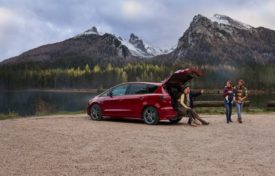 The third option, and the one we tried, is the S-Max Hybrid. Unlike its Ford stablemate, the Kuga, this is not a plug-in hybrid, but a full, self-charging hybrid a la those from Toyota or Lexus.

This means you can’t charge it from the mains and it has no meaningful electric range, but can still drive on electric power for short distances. The battery is constantly charged by the 2.5-litre petrol engine and regenerative braking. The car’s clever computers work out how best use petrol and electric power for maximum efficiency.

In short, the S-Max is still a great MPV with its huge, flexible and versatile interior and very good to drive. The versatility is highlighted by the three rows of seats allowing seven people to be carried – although the rearmost ones can really only accommodate small children.

They do fold flat, however, and are very easy to stow or erect via helpful buttons in the cargo area. The middle row has three individual seats and the whole lot can be configured any which way you like. With all seven seats in place boot space is limited, but with the rearmost seats folded flat the cargo area is truly cavernous.

ordWith plenty of glass, the cabin feels light and airy although this latest generation now dates back seven years to 2015 – there was a bit of a facelift in 2019 – so there is a slightly outdated feel to the instrumentation and infotainment.

There’s plenty of storage with huge door bins and a handy compartment on top of the dashboard – just like that old Espace –  and loads of room under the centre armrest.

So, spacious and comfortable and remarkably good to drive. The hybrid feels very refined while returning good economy at well over 40mpg.

More than 20 years ago I remember a story about how Ford developed a jump suit that effectively ‘aged’ its wearer so that the company could cater for older drivers. I am now one of those older drivers and I can tell you, the technology worked. Over some 500 miles or so I suffered little of the stiffness of leg experienced in many cars now at the end of a long journey.

Steering is accurate and the S-Max displays negligible roll and provides a comfortable, nicely damped ride although this is not the sort of car you are going to be tempted to throw around corners.

The S-Max Hybrid has a 2.5-litre petrol engine along with a small electric motor and CVT transmission. It is possible to stay in electric drive in traffic and even up to 30mph if you’re careful before the engine kicks in. The hybrid powertrain is quiet and smooth as is the CVT and that 2.5 litre engine.

While the market swings towards stylish crossovers, The S-Max proves there is still room for a good, old fashioned and versatile MPV.