The fourth and final (so far) part in the Genesis story, the latest brand to hit the UK market. Four models so far but there are more to come pretty soon.

Following on from the G70 and GV70 and GV80 in recent months, we now have the G80, a spacious luxury saloon.

As previously explained, Genesis is the upmarket brand from South Korean maker Hyundai. It has been around in the Far East and the US for some time but only came onto the UK market around the middle of last year.

So where can you find a dealer? You can’t. Genesis currently operates without a traditional network, although you are likely to see pop-up stores some of the larger shopping centres.

Much of the enquiry and buying process is done online, until one of the brand’s Personal Assistants enters the process to cross the Ts and dot the Is before delivering the car to you. If you want a test drive first, the Assistant will bring a car to your home or work – and they’ll come back with a different engine if you’re still unsure.

Come time for a service, a courtesy car is delivered and yours taken away. This is good for five years or 50,000 miles, whichever comes first, and is all rolled into the somewhat hefty purchase price. There’s also five years unlimited-miles warranty, five years roadside assistance, along with Over the Air software and map updates.

So, being an upmarket brand, Genesis is pitched into a very competitive sector dominated, of course, by the German premiums as well as manufacturers such as Jaguar, Range Rover, Bentley and even, increasingly, Volvo. Many have tried before and many have failed – General Motors (Cadillac), Nissan (Infiniti) and Mazda (Xedos).

Toyota’s upscale Lexus brand has taken more than 30 years to achieve something close to acceptance in the UK (and Europe) and now sells only models that are electrified in some way. Interestingly Genesis does not yet have any form of electrification …… yet.

It does have products on the launch pad based on the electric platform used by the Hyundai Ioniq 5. Currently, though, engines are a 2.5-litre petrol and a straight-six 3.0 diesel, both with four-wheel-drive as standard.

The G80 comes is certainly at the luxury end of the saloon market and offers lots of standard features, luxury seating and lots of space. It’s up against the likes of the BMW 5 0r 7 series, Audi A8 along with the bigger Mercedes. While the Genesis can match them on looks and equipment, it struggles to compete as an equal when it comes to performance and handling.

There is a choice of 2.2-litre, 207bhp four-cylinder diesel in rear-drive only form, or a 2.5-litre, 300bhp turbocharged four-cylinder with all-wheel drive – the model we tested.

Let’s start with the look. The G80 is nicely styled and that rather chunky grille gives away the fact that this is a brand aimed mainly at Far Eastern and US tastes rather than European. Its size, measuring almost 5 metres in length, puts it closer to BMW 7 series rather than 5 while prices start at £37,460.

Despite the high level of standard equipment, there are a lot of goodies that can be added and before you know it, you could be heading north of £57K as in the car we reviewed. What you are getting for your money is a smooth and comfortable ride although there is a distinctly US feel to it, particularly on rougher or undulating road surfaces.

It all feels nicely put together and there is an air of luxury about the interior which has all the right technical equipment loaded as Genesis has majored on safety as well as comfort.

And here’s a thing – there’s double glazing as standard on the front windows (optional on the rear) to suppress road and wind noise. It uses similar to the technology as that in noise-cancelling headphones. All the controls fall easily to hand and the seating is adjustable in almost every way possible and very comfortable. After a long distance trip you will get out of this car feeling pretty fresh. 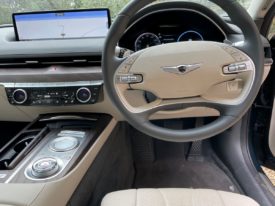 The central screen is operated via a rotary touchpad or directly by touch and graphics are really easy to read, while the  drive controller is also a rotary knob while climate control has both touch and physical switchgear.

If you’re looking for that extra touch of luxury, there’s a leather Nappa pack which adds a pair of massage seats.

Despite having only a 4-cylinder petrol engine, you wouldn’t know it until you really lean hard on the accelerator, but then if you are in a hurry, there’s a lot of weight needs shifting. The car sticks to the road well enough although don’t expect the sort of handling you’ll find from a Jaguar or BMW.

As for fuel economy, Genesis claims 26.1mpg which is generally around where we were with the car although on one, sedate, 80 mile, non-motorway trip we did achieve just a smidge over 30mpg. 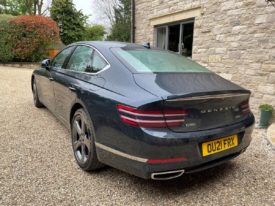