It’s Volvo’s smallest SUV and it’s been around for a few years in petrol, diesel, hybrid and PHEV form. The diesel was dropped in 2020 among the first moves by the brand towards full electrification.

Now we have the fully electric XC40 Recharge, the brand’s first pure-electric car and a major step in its plan to have a fully electric range by 2030.

It’s not particularly cheap though with a starting price close to £50,000, which undercuts some rivals from Tesla and Audi, it doesn’t match their range figures.

The starting price is for the single-motor version, which has a 69kWh battery while the longer-range twin-motor gets a larger 78kWh battery and can cover up to 259 miles on a charge – although we could get nowhere near that number, perhaps due to the number of steep hills where we were testing, plus the car was set up to charge only to 80%.

The twin-motor’s all-wheel-drive powertrain produces 408hp, good for 0-62mph in under five seconds, while the single-motor, front-wheel-drive variant makes a lesser 227bhp, so 0-62mph takes over seven seconds.

One thing you can always be sure about with Volvo is safety and the fully electric Volvo Recharge has been awarded a five-star safety rating by Euro NCAP.

Volvo Cars was the first established car maker to commit to all-out electrification and aims to sell only pure electric cars by 2030. Already by 2025, it aims for half of its global volume to consist of pure electric cars. Reflecting Volvo Cars’ ambition to be an industry leader in safety, the upcoming generation of Volvo models also aim to set new standards in safety.

There’s little to tell the fully electric version of the XC40 apart from other versions – but they all look pretty good.

On the road, it’s a pleasure to drive thanks to a powerful drivetrain that delivers bucket loads of torque. This translates into almost instant acceleration, maybe not Tesla levels of performance version, but it is quick.

From the outside it doesn’t come across as a particularly big car, even in this segment, but there is bags of room inside both for passengers and cargo. The charging leads are housed in the front ‘bonnet’ area within a custom containment area rather than stored in the boot – in a bag which no one ever seems to use more than once.

Most of the weight is below the floor and evenly spaced front to back so the handling is pretty good – certainly more than enough for the average driver. As already mentioned, plenty of acceleration when required, but very much a pussy cat when cruising or around town.

All new Volvo car models are now available with over-the-air (OTA) software update capability, a key technology to deliver on Volvo Cars’ ambition of making customers’ cars continuously better and cementing its position as one of the industry leaders when it comes to updating car software over the air.

Volvo owners will get an upgrade of their infotainment system to the latest version of Android Automotive OS, Android 11. They will also get access to new app categories on Google Play, including navigation, charging and parking, while video streaming is expected to be added later in the year. 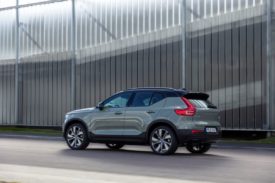 The energy management improvements help to maintain battery performance during both cold and warm days, boosting driving range. The Volvo Cars app also receives more frequent updates from the car on the charging percentage during an ongoing session.

The latest OTA update is the company’s eighth complete car update and will reach more than 190,000 Volvo cars across the globe.

Since the beginning of last year, Volvo Cars has been offering OTA updates on a regular basis in the majority of Volvo markets, and the company expects the volume of cars covered by such updates to grow with every new update.

The company will also offer its infotainment system with Google apps and services such as Google Assistant and Google Maps built-in across all new models, continuing the rollout of one of the best in-car infotainment platforms on the market.