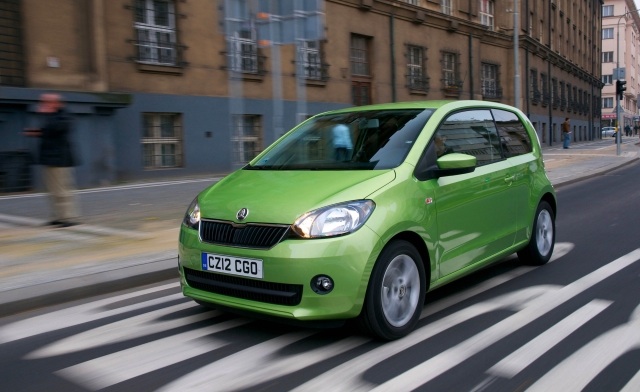 Skoda, the Volkswagen’s group’s self-declared ‘value for money’ brand, is poised to launch a vigorous new assault on the UK’s business car user sector. And looking at the array of weaponry about to fall into his hands, Skoda UK  brand director Robert Hazelwood says he can hardly wait.

On June 1, the much-heralded, bargain basement Citigo “city” car will start heading out of Skoda’s 133 UK showrooms. Even Hazelwood acknowledges that, initially at least, the Citigo will be of interest mainly to private buyers in the UK, with perhaps 15 per cent of first-year sales going to fleets and other business users.

But Jurgen Stackmann, Skoda group’s boundlessly enthusiastic Board member for sales and marketing,  describes the Citigo as a “key element” in the further global growth of the Skoda brand and comes up with some astonishing projections for the city car sector which, he says, will change the perceptions towards it of business and private users alike.

“Be in no doubt; the subcompact sector is becoming a hot spot around the globe. We project that it will rise by one-quarter up to 2014 and then by 40 per cent through to 2020. That’s right, 40 per cent not 14. CO2 emissions, fuel economy – they’re all coming together  to provide sustained growth.” 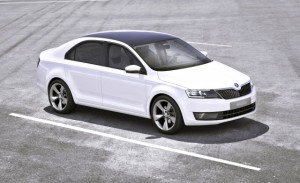 At the Chinese Beijing motor show, Skoda unveiled this, the new Rapid - due here later in 2012

Meanwhile, at April’s Beijing motor show the wraps came off Skoda’s swoopy-looking Rapid saloon, destined to go on sale towards the end of this year, which will fit between the Fabia  supermini and Octavia saloon/hatch range and which has the potential to become Skoda’s biggest seller.

Even then, enthuses Hazelwood, business users ain’t seen nuthin’ yet.

“2013 is going to be a really, really exciting year.  The current Octavia’s strong residuals and low BIK have already stood it in good stead with user-choosers. But there’s a new Octavia coming next year and just wait until you see it; it is, quite simply, stunning – and there are other cars in the same mould to follow.”

With the flagship  Superb having also already carved a secure niche for itself in business users’ portfolios, Hazelwood  says the inflow of all-new models likely to appeal to a broader spread of user-choosers  is providing  an ideal opportunity to  move  SME and other fleet business considerably  higher up Skoda UK’s agenda.

The result is a new business user-targeted programme, “Fit for Fleet”, which Hazelwood is now putting into place and which will see 40 of Skoda’s UK network  setting up divisions dedicated solely to Skoda business user needs, with standalone PDI operations and servicing.

“We expect those 40 dealers to handle 70 per cent of Skoda’s fleet and other business activities”, says Hazelwood.  Arnold Clark, Lookers and Citigate are among  heavyweight dealer groups already signed up. In the meantime Hazelwood want to lift the total dealer network to over 140 to further improve UK coverage and leaving no-one needing to drive long distances to a dealership.

Skoda sold 45,000 cars in the UK last year; about 55 per cent of them retail. Hazelewood is cautiously optimistic  about UK market prospects this year, expecting just enough growth, with Citigo’s help,  to lift total  sales to around 50,000. With at least two new models a year due over the next three years, he suggests that by 2015 Skoda could be selling around 78,000 a year in the UK.

Stackmann himself, pointing out that the UK is Skoda’s third largest market, insists that the Citigo marks “the start of a great journey of the brand; a  three-to-four year product journey which will see a new car every six months. We have already seen 20 years of uninterrupted growth and last year we had  global sales up 15 per cent to a record 880,000 – and that was without any new cars. We are growing in every region of the world. And we believe Citigo will add major fuel to our growth in the immediate future because people are gathering more and more in cities everywhere in the world. That is the trend, whether you like it or not.”.

But will the Skoda jokes end?

While he is uncompromising in his defence of high Skoda engineering standards (is there anyone left on the planet who does not know that the standards, like Skoda itself, are VW’s?), Hazelwood acknowledges, grudgingly, that “there is maybe another generation cycle to go” before the very last few copies of the Book of Skoda Jokes are buried beyond recall in an unmarked grave.

“When it comes to business car user-choosers, there remains a little way to go in terms of changing their perception of the brand. But just watch when the new Octavia VRS pitches up in the middle of next year. It’ll be a show-stopper. And at that stage everyone will see Skoda’s new design capabilities and any last vestiges of the past will be completely dead and buried.”

For an SME business car manager that car news will be entirely welcome.