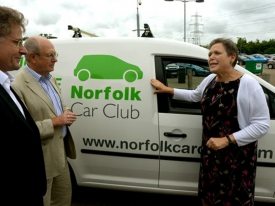 Baroness Susan Kramer, Minister of State for Transport, with one of the winning car club schemes in Norfolk

WINNING car club schemes taking a share of a £500,000 government handout have been announced for Derby, Nottingham, Norfolk and West Yorkshire, making them ever more attractive for local SME business managers.

She said:  “These investments will give the growing interest in car clubs added momentum. Car clubs cut congestion, reduce carbon and save people money while still giving people the freedom and flexibility to use a car when they want to.

We can now look forward to the winning towns and cities providing a practical demonstration of the increasing relevance of car clubs to sustainable transport throughout England.”

The grant is hoped to kick start or expand projects in small towns and rural areas and also fund projects that aim to improve transport integration for both business and private users.