LIKE the practicality of the new MINI Clubman, but need the security of all-wheel drive?

No problem, as MINI has started producing the MINI Clubman ALL4 all-wheel drive versions of the recently launched, business-friendly estate.

Fitted with MINI’s ALL4 all-wheel drive system which debuted on its first five-door model the Countryman, the system has been revised in the Clubman to ensure sportier handling and improved versatility for the new MINI Clubman.

The Cooper S and Cooper SD ALL4 versions are also the first all-wheel drive models to be built at Plant Oxford.

The Cooper S Clubman ALL4 is powered by the same 192bhp, 2.0-litre 4-cylinder TwinPower Turbo petrol engine with 6-speed manual transmission as standard, and optionally available with an 8-speed Steptronic transmission.

Even with ALL4 all-wheel drive, the Cooper S is still capable of 40.9 mpg with the manual transmission, with 44.8mpg for the auto and has CO2 emissions of 159g/km and146g/km respectively.

Go for the Cooper SD Clubman ALL4 and it’s powered by a 190hp 2.0-litre diesel engine, with 400 NM of torque and paired with MINI’s 8-speed Steptronic transmission as standard.

Fuel consumption is impressive considering the addition of ALL4 all-wheel drive, as the Cooper SD is still capable of 58.9mpg with CO2 emissions of 126g/km.

Specifications for ALL4 Clubman models are broadly the same as the standard range, although the Cooper S and Cooper SD models also get the MINI Excitement Package as standard, which includes a projection of the brand logo on to the ground beneath the driver’s side door mirror when the car is opened and closed, as well as extended interior lighting.
Production of MINI Clubman ALL4 has started at MINI Plant Oxford, with prices starting at £24,305 and first deliveries expected in April. 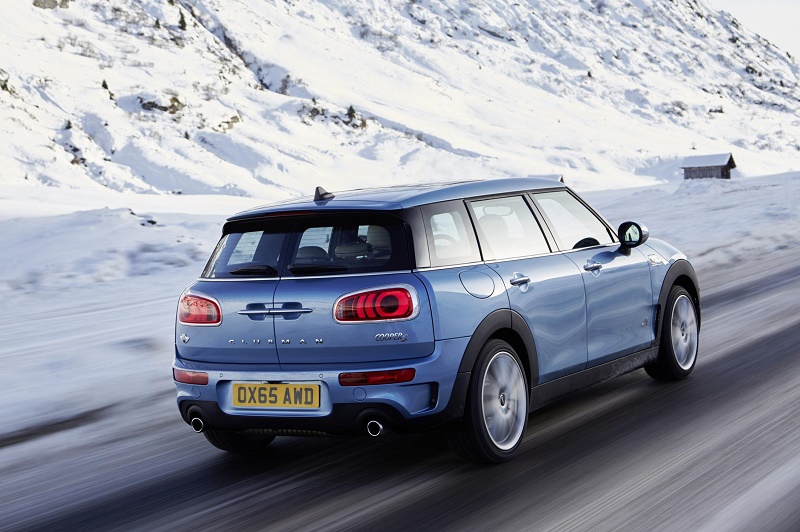