The king is dead – long live the king

AFTER nearly 30 years Ford is killing off the Mondeo, the traditional three-box saloon and backbone of many fleets and company reps for decades.

Hastening its demise has been the evolution of fleet market, with PCPs, PCHs and other forms of leasing providing access to other brands – particularly the German premiums.

The new king for Ford, and all manufacturers, is SUV – and electric. And Ford has come into this area with a big bang, the Mustang Mach E. A big muscle machine, albeit a quiet one, with an iconic name and a very affordable price.

We have just been testing the Mach E for a few days, but more of that later. Along with the announcement that the Mondeo will be phased out during 2022, Ford said it will continue to invest in an electrified future with a new 2.5-litre Duratec hybrid engine and increased battery pack assembly capacity.

The new 2.5-litre Duratec hybrid engine for Europe will be built at Valencia in Spain and will power the Kuga PHEV as well as the Kuga, Galaxy and S-MAX Full Hybrid models. The 2.5-litre Atkinson cycle petrol engine is the first of its kind to be built by Ford in Europe and  reinforces the importance of PHEV and full hybrid vehicles in Ford’s current and future vehicle line-up in Europe.

Earlier this year, Ford announced it is investing at least $22 billion globally in electrification, nearly twice the company’s previous electric vehicle investment plans, and that it investing $1 billion to create the Ford Cologne Electrification Centre in Germany for the manufacture of electric  vehicles, the company’s first such facility in Europe.

By mid-2026, 100% of Ford’s passenger vehicle range in Europe will be zero-emissions capable, all-electric or plug-in hybrid, moving to all-electric by 2030.

Ford’s Fleet Director Neil Wilson said: “We have been very proud of the Mondeo over the years and it was a game-changer for the brand. It’s been an iconic car in the industry and we will be sad to see it go.

“But we are seeing our customers making new choices and they are moving into a new generation of vehicles and becoming more interested in some sort of electrification. We’ve certainly seen people moving out of Mondeo and into Kuga PHEV for example.”

Which brings us back to the Mach-E. For the first time ever, Ford is expanding the Mustang family, bringing the famous pony into the electric age with Mach-E, an all-new, all-electric SUV born of the same free-spirited ideals that inspired the best-selling sports coupe in the world.

Not so much a muscle car, but a Mustang reimagined with space for customers’ growing needs and advanced over-the-air updates that continue to improve the vehicle. 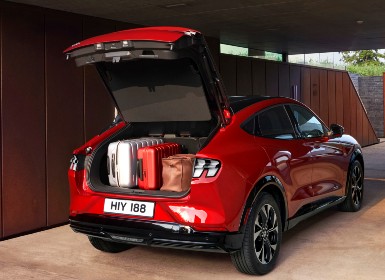 Powered by a responsive, energy-efficient, battery-electric drivetrain, the first-ever SUV member of the Mustang family is offered with a choice of single-motor rear-wheel drive or dual-motor all-wheel drive. Mustang Mach-E can deliver super-car-comparable 0-62mph acceleration in as little as 3.7 seconds in the upcoming Mustang Mach-E GT.1

The Mustang Mach-E also offers 1 Pedal Drive capability that helps return more kinetic energy to the battery, for greater efficiency. Acceleration and deceleration are controlled through pressing or lifting-off the accelerator pedal respectively – for the authentic all-electric driving experience. The brake pedal remains active for situations where greater braking power is required.

The interior and instrument panel is dominated by a giant of a screen, way bigger than iPad size, it’s like a flat screen TV. While it’s very easy to read, it can also become a bit of a distraction.

But it does enable the debut of next-generation SYNC, Ford’s connectivity suite, which enables more than 80 vehicle settings to be customised – from cabin temperature and seat position to ambient lighting.

Machine learning helps understand habits over time, learning from each drivers’ routines to make the right navigation and communication suggestions at the right time, enabling drivers to concentrate on the road.

Next-generation SYNC also boosts driver confidence with connected navigation. Real-time and predictive traffic information is provided by location specialists TomTom, while in-vehicle and in-cloud routing provided by Garmin ensures drivers are always offered the most efficient routes to their destination.

Journeys can be pre-planned with itineraries pushed from the FordPass app to the car. Next-gen SYNC can also independently advise drivers where and when to charge during journeys, as well as providing access to real-time charging station availability and pricing.

Getting in and starting the vehicle is easy and effortless with Phone As A Key technology 1 which also makes its Ford debut in Mustang Mach-E. Using Bluetooth, the vehicle can detect customers’ smartphones as they approach, unlocking the doors and allowing them to start driving without getting their phones out of their pockets or using a key fob.

A backup code can be entered into a keypad on the B-pillar to unlock the vehicle, and a separate code into the centre touchscreen to start and drive the vehicle, in the event a phone battery dies. Mustang Mach-E can also apply individual drivers’ preferred vehicle settings before they enter by identifying smartphones and keyfobs as they approach. 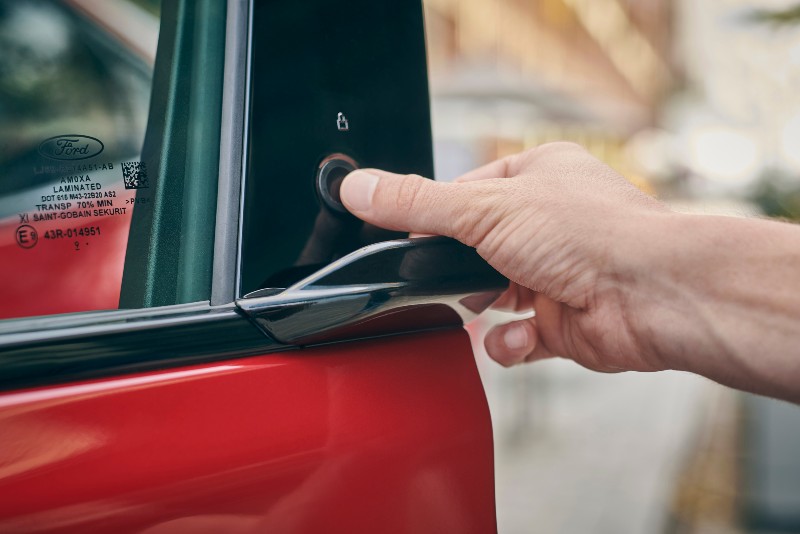 Available hands-free tailgate technology also simplifies access, enabling the rear hatch to be opened with a simple kicking motion under the rear bumper when arriving at the vehicle with arms full.

Smart and comfortable, the Mach E is smooth to drive on the road with Mustang-like performance when you need it for overtaking etc – and while it’s largely silent, has there been a slight sporty audible growl built in, or was I imagining it?

Two key numbers though – range and price. The Mach scores highly on both. A full charge brings up a range of around 270 miles while you get all of the above for £40,350. That’s not hugely more expensive than many of the smaller EVs on the road and considerably cheaper than something more comparable such as the Audi e-tron S Sportback which we recently tested. 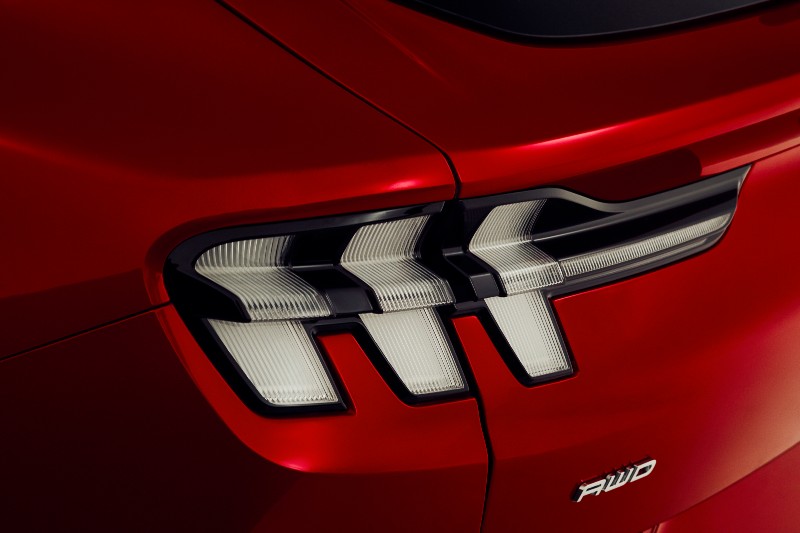 So, who is the Mustang Mach E going to appeal to? Fleet chief Wilson said the car has a broad range of appeal and that dealers already have a healthy order bank.

He added: “We also believe that this car will bring new people into Ford ownership and we certainly see the Mach E as part of our fleet strategy going forward given the BiK incentives of running an EV.”

Wilson said: “That was very much an unexpected surprise and we are very disappointed. We just don’t feel it’s the right move but we are working with our dealers and internally to minimise the impact.

“We need to find out if those cars already on order still qualify for the grant, however, so far, orders haven’t been affected. 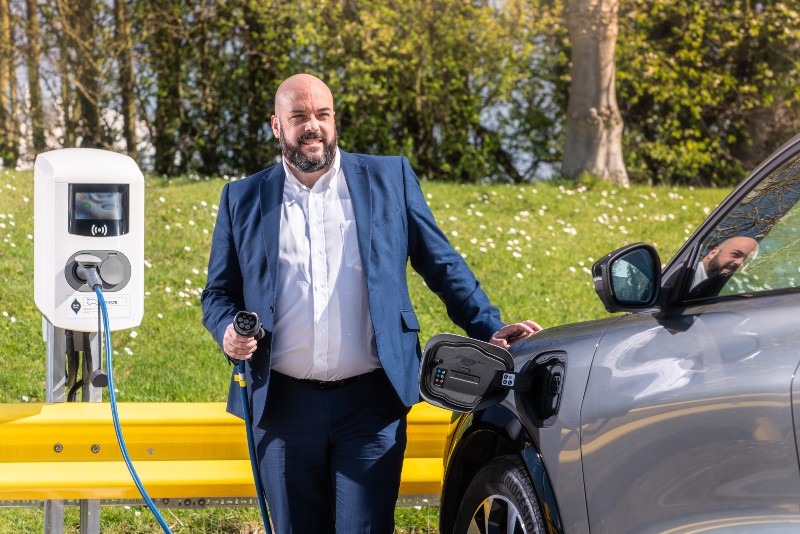 “The past 12 months have been difficult but we have detected changes in attitudes. Customers and fleets have been looking at how EVs will fit particularly as range and charging ability get better. EVs are very much at the forefront of reducing the carbon footprint and we expect the electric Transit van due next year to be another hugely important vehicle for us.

“While we had been seeing a move towards grey fleets, there is now a move back but the market is evolving quickly. The past year has seen a growing diversification in the way people want to use their vehicles.

“The subscription model is growing, allowing people to change their car to suit different occasions or even to try before they buy.”