IT’S the second instalment in our Genesis story following the opening chapter on the G70 which explained that this is the latest name on the market – the upscale brand from South Korean maker Hyundai.

The line-up includes the G70 Saloon, G80 Saloon and their SUV siblings the GV70 and GV80. The brand has actually been around for a few years in places such as China and the US, but it has only been available in the UK since the middle of last year.

So, the SUVs have a ‘V’ in the badge which we are told stands for versatility and the GV70 plays in the same arena as the likes of the Audi Q5, BMW X3 the Audi Q5, Mercedes GLC and Porsche Macan, and that’s part of its problem as it breaks into the UK market – it’s up against the German premiums as well as rivals from Jaguar and Volvo.

Prices start from just under £40K, so that’s a plus while engine choices are either a 2.2-litre diesel or a 2.5-litre turbocharged petrol. Both are four-cylinders, both have 8-speed automatic transmissions and all-wheel drive as standard.

These engines aren’t particularly groundbreaking and currently there are no electrified versions – although they are coming.

As we said with the saloon model, one thing Genesis does have going for it is looks and the SUV has real road presence while there is an Aston Martin or Bentley vibe to the bonnet badge which draws comment. The GV70 comes in the base Premium Line, Sport Line and top spec Luxury Line trims. 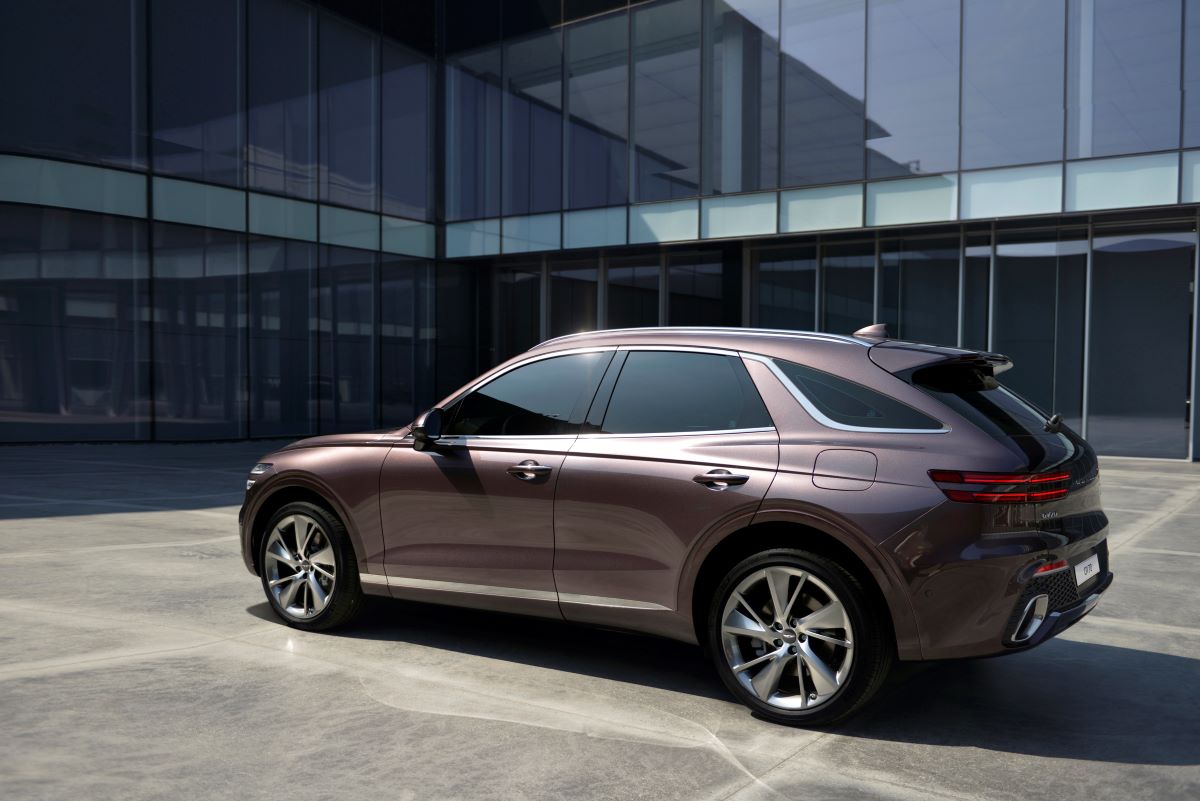 While it looks good on the inside, it is also very pleasant in the cabin as well. We had expected the interior to be carried over from the saloon model but this is not entirely the case. If anything, the SUV’s interior is a little more minimalistic which is a good thing, and it all feels very nicely screwed together.

Take to the road and there is nothing to complain about although the petrol heads will discover there’s not the refinement or performance of many of those rivals.

It’s a comfortable enough cruiser as we discovered over 500-odd miles but the diesel does sound a little strained when you push on. Pretty good on fuel economy for what is quite a large car, though, returning just under 35mpg.

Amongst the centre console-mounted controls you’ll find the drive modes, Eco, Comfort and Sport drive modes while there are also settings for various terrains or road conditions.

Under normal driving, all the power and torque goes through the rear wheels and the system automatically switches the power around all four wheels as and when needed. You can set the dash display to show you what’s happening which is interesting, if a little distracting.

Overall the GV70 rides pretty well and it uses ‘Road Preview’ scanning technology that reads the road ahead and can prime the adaptive dampers for potholes and other imperfections.

There are three different terrain modes aimed at providing maximum control on either mud, sand or snow. I can’t vouch for snow or sand but performance in the mud is good.

Plenty of mud on the narrow Dorset lanes which also threw up one annoyance – Hyundai’s hyperactive Lane Assist system which is certainly effective at beeping and pulling you back into line but it’s too effective on the narrow lanes. It can be switched off, though.

The dash features one of the biggest touchscreens around – if you discount Tesla and the Ford Mach E. It is a full 14.5-inch screen with high-definition graphics and good responses. It can  be controlled by a clickwheel on the centre console or by prodding the screen with your finger. 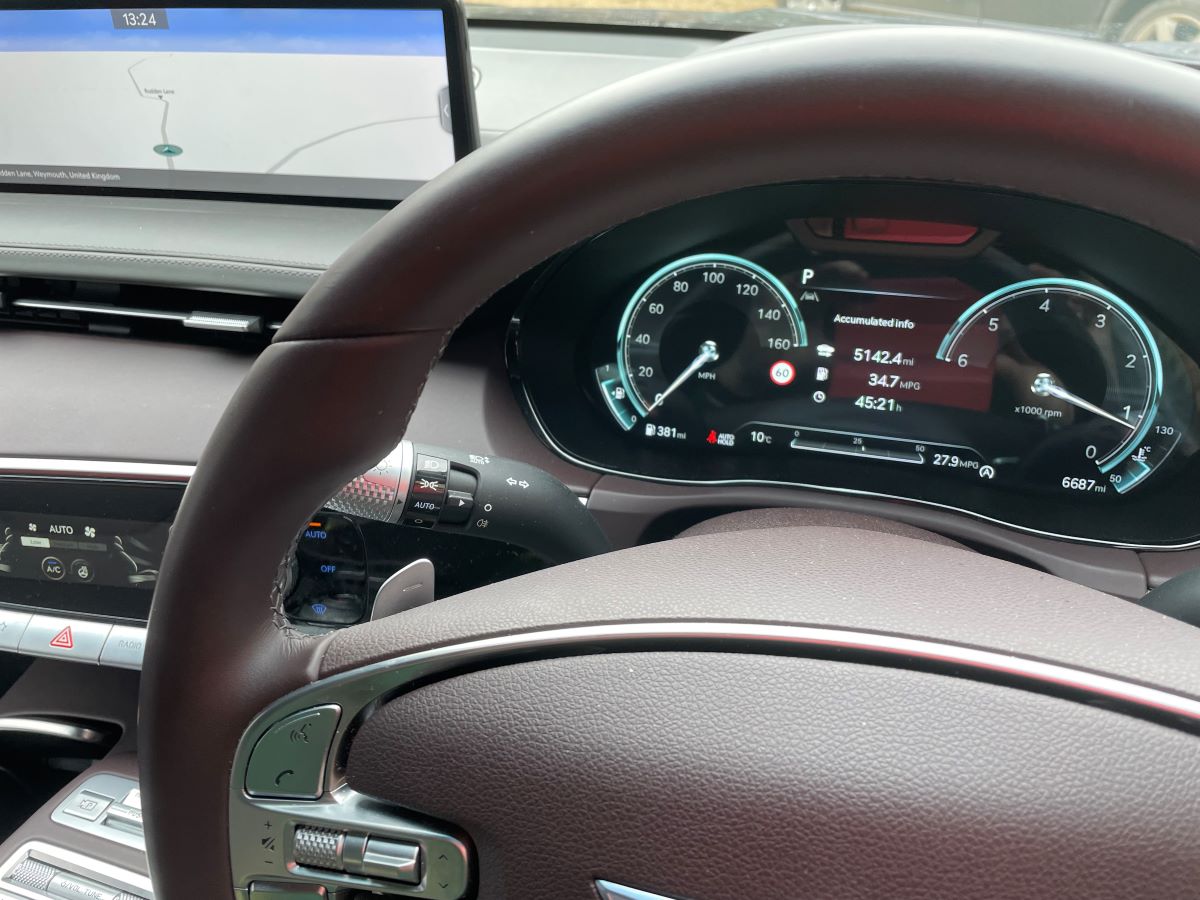 The clickwheel means you don’t have to take your eyes off the road, but it is also mounted too close for comfort to the rotary gear selector and so easy to confuse the two when keeping those eyes on the road.

There are option packs which bring you such things as all round camera angles, head-up display, wireless phone charging and Hyundai-Kia’s very useful Blind-Spot View Monitor that brings up a rear/side view in place of either the speedo or rev counter when indicating. We’ve seen this now on other of the brands’ latest models such as the EV6 and new Kia Sportage.

Android Auto and Apple CarPlay come as standard and generally everything is nicely laid out and easy to use.

There are plenty of adjustments in the front seats and the soft seating may not suit everyone – I for one found the tops of my legs aching after a while in both the G70 and GV70. No complaints from other occupants, however.

There is a £1,470 Comfort Seat pack which adds a massage function to the driver’s seat and enhanced side support at speed – you can feel the seat sides moving around you. 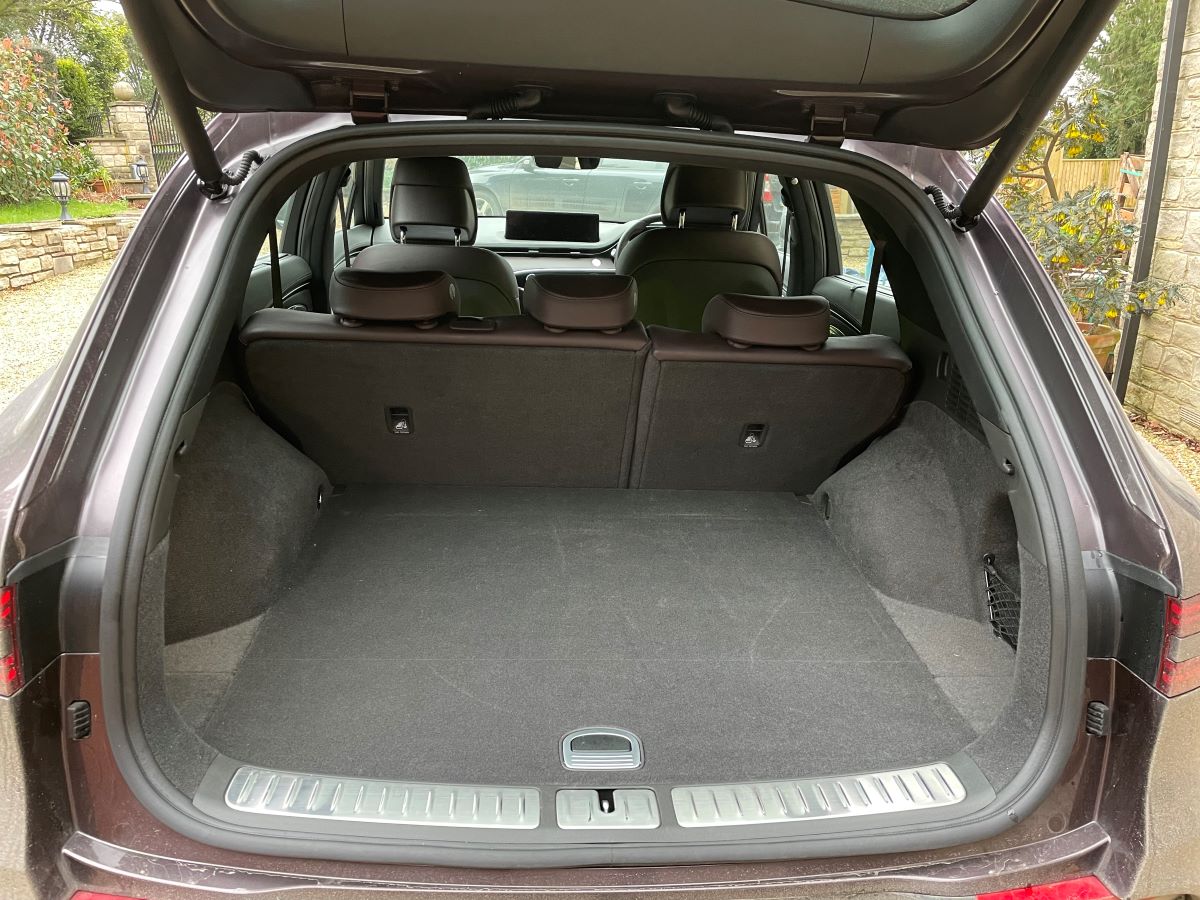 Not a massive amount legroom for rear seat passengers but there’s masses of space in the boot – 542 litres with the rear seats in place.

Don’t go looking for a Genesis dealer, however. The brand is going a different route in terms of taking the car to the customer. Genesis has what it calls the Five Year Care Plan. This begins before you buy the car, when a ‘Personal Assistant’ will guide you through the process and deliver a car to your door for you to test drive.

Once you’ve bought the car, you get a five-year warranty, five years of complimentary roadside assistance, free over-the-air updates and five years of servicing where Genesis will collect your car, drop off a courtesy car and then return it once everything is complete. This is supposed to be a proper luxury experience at a mid-level price point.