AS we approached the end of 2021 I was wondering what my favourite test car was. Tough choice as they were around 40 to pick from, but the very last one of the year ended the debate.

The Škoda Enyaq EV is, simply put, a brilliant piece of kit….

Well, not quite as I have some explaining to do. Firstly….

It’s an electric car from Škoda, the Czech arm of the Volkswagen Group, and so it is based on the same underpinnings as the electric VW ID.4. It also uses the same powertrain and technologies wrapped up in a new skin and has it’s own interior décor.

The all-new Škoda Enyaq iV is one of the most significant new models ever introduced in the brand’s 126-year history. Fully electric and designed from the ground up to deliver a completely new driving experience, it sets new benchmarks for space, technology and value.

Customers can choose between two battery pack sizes; 62kWh and 82kW and then opt for one of six interior design selections and choose from option packs. There is also a SportLine model which delivers an even more dynamic exterior look and a unique interior package.

The battery is incorporated into the floor to save space and both Enyaq iV 60 Nav and Enyaq iV 80 models feature a rear-mounted motor and rear-wheel drive, marking a return to the drivetrain layout that came to typify the brand’s output in the late 60s and early 70s.

The entry level 62kWh battery model is equipped with a 179PS (132kW) motor that drives the rear wheels through a single-speed transmission. It has a WLTP combined range of up to 256 miles on a single charge.

There are three charging options. In addition to using a standard household 230V socket with 2.3 kW alternating current (AC), it can be charged at home overnight using a wallbox of up to 7.2kW. Depending on the battery size, the 7.2kW wallbox charging process takes nine to 13 hours. As a third charging option, the vehicle can be connected to rapid DC charging points with a charging capacity of up to 125 kW. This allows the Enyaq iV to be charged from 10 to 80% in around 38 minutes.

Although it shares the same platform, the Enyaq is longer than the ID.4 allowing for a larger bigger boot – more than 100 additional litres more with all the seats folded flat and that is significant.

More important, it is cheaper than the VW. However, there was some bad news in December as the Government lowered the threshold (and the value) of its EV plug-in grant, to £32,000. That means the entry model no longer qualifies whereas it previously snuck under the £35K cap.

Step inside and half the work is done for you. No need to look for a start button, the Enyaq is already ready for action. Just press the brake pedal, put it into drive and you’re away. Similarly, no need to switch off at the end of the journey, put it into park and get out. All of which is counter-intuitive – is it on, is it off? But you soon get used to it.

The ride is gloriously quiet and smooth although not a huge amount of feel through the steering. Wind and road noise are well suppressed and the Enyaq feels equally at home on the motorway or when running around town and country.

Enyaq 80s have paddles on the steering wheel to adjust the amount of brake regeneration, or the transmission’s ‘B’ mode   lock it in its strongest setting.

Regardless of model, the Enyaq iV ushers in a new era of ŠKODA interior design. As customers have come to expect from the brand, all Enyaq iV variants offer state-of-the-art connectivity and infotainment features.

The driver is shown all of the relevant information via a free-standing, 13-inch central display and, if desired a head-up display with augmented reality as an optional extra. A permanent internet connection ensures that all information is always up-to-date, while a connected app allows drivers to schedule and control charging and cabin pre-conditioning remotely.

There is plenty of light in the cabin. Thanks to the shallow angle of the windscreen. The dashboard features a series of layers, with each one introducing a different texture and material.

Such is the depth of the dashboard that Škoda has been able to integrate an augmented reality head-up display without the need for a pop-up screen panel. The driving position has a broad range of adjustment and offers drivers exceptional levels of legroom, while the telescopic steering column allows drivers to quickly find the right set-up. 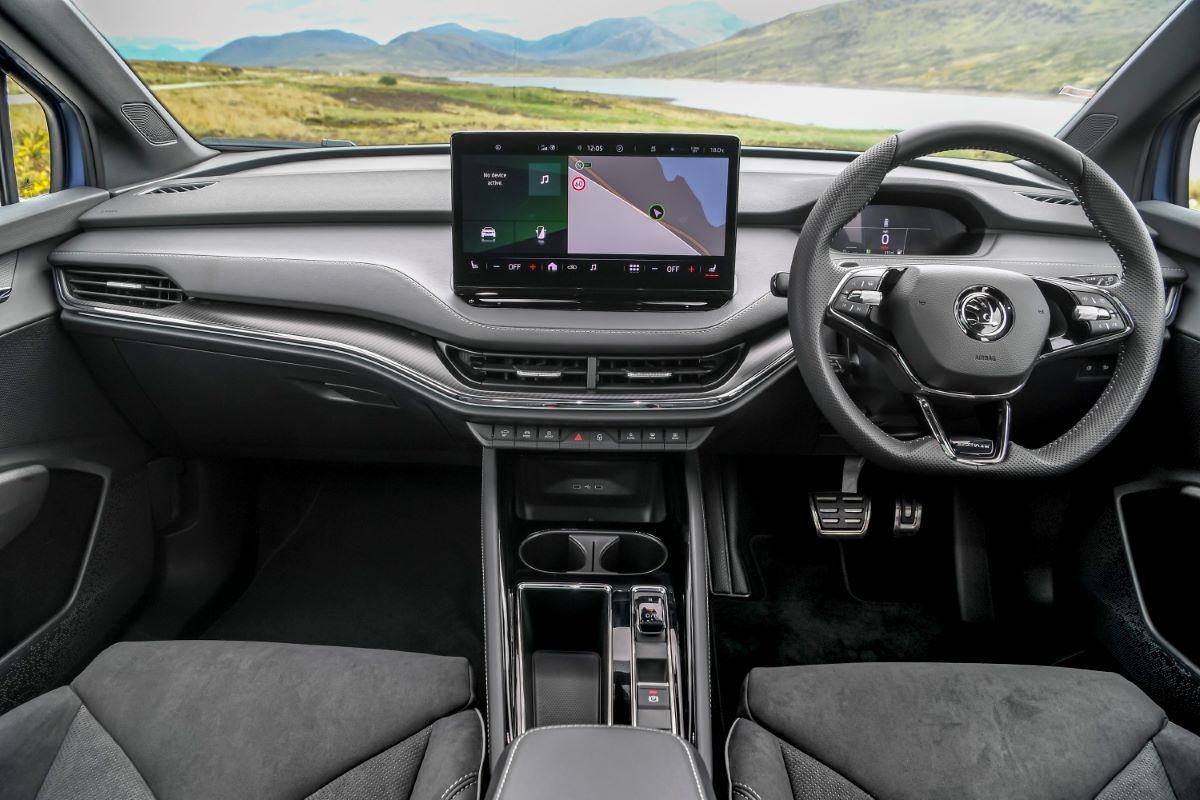 The seats have been completely redesigned for the Enyaq iV and come with massage option for the first time. Both front seats come with height adjustment and lumbar support while the two-spoke steering wheel is heated and adds recuperation paddles on Enyaq iV 80 models.

There is an integrated infotainment system that provides connectivity and access to real-time information. A large 13-inch touchscreen display is positioned high on the dashboard and angled towards to the driver.

In addition, Enyaq iV models have a smaller Virtual Cockpit display behind the steering wheel. In the rear, the Enyaq iV offers exceptional levels of legroom, providing high comfort levels to passengers regardless of size.

Foot room is also impressive thanks to the flat floor, with the ability to optionally heat the rear seats will keep all passengers toasty and warm on the coldest days.

Further back, the Enyaq iV’s boot has a capacity of 585 litres with the rear seats in the upright position and 1,710 litres with them folded. When specified with the optional Transport Package, the rear seats can be folded forward simply by using the remote release button. Owners can also operate the tailgate remotely with Virtual Pedal – a feature included in the Convenience option package.

Overall, Škoda probably represents a better buy than the VW ID.4, although we have to point out that we’ve not actually tried the VW yet. Hopefully we can rectify that before too long. But Enyaq does appear to be better value in terms of pricing while it also looks better than the ID.4, more conventional in its styling – although EV fans who like to be different may disagree.