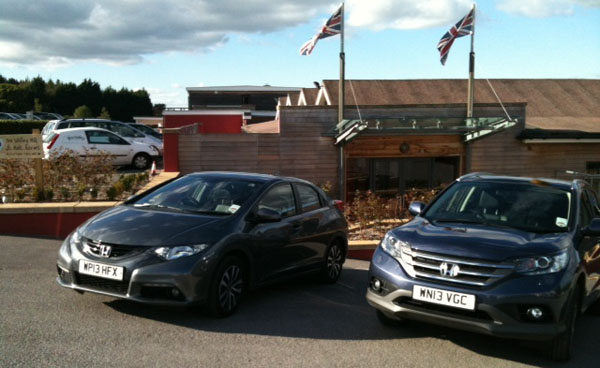 Yeo Valley yoghurt is switching to Honda Civics and CR-Vs for its small fleet. Some of the Civic’s will be dressed up as yoghurt pot flavours, promoting the brand as they travel the country

IT’S probably not the first thing you’d do to your company car fleet – turn it into a dairy herd of yoghurt pots.

But when you are Yeo Valley Family Farms, there is a point. A very good marketing point.

Makers of dairy products – including yoghurts – Yeo Valley has switched its small fleet from posh Audis to Honda Civics and CR-Vs.

Having come from leasing company ALD originally, Leon Wilce has been with been with Honda for eight years now, always in a business to business function at dealer level

Leon joined Honda Bristol nearly three years ago and turned what was a loss making operation into what is a now a profitable corporate sales department.

“My interest has always been in B2B,” says Leon. ”I enjoy communicating with people. The whole concept of building long-term relationships is the most enjoyable aspect of the job.

“After 8 years these customers have become friends and servicing their requirements is really pleasing. Building understanding is key rather than expecting people to come to the dealership.

“We now have some established companies whose SME fleets are now all Honda – despite the issues we’ve had until recently with lack of suitable Honda product. Providing outstanding service is the key.”

“They will brand up five Civics in their yoghurt flavours! It’s a nicely quirky idea and will replace their smart cars that are currently branded like that,” explains Leon Wilce, Corporate Sales Manager for Honda in Bristol.

“Apparently you’ll be able to go to the website and see where the Blueberry Civic is!”

Leon says that Honda will now supply only Hondas to the 50-car small fleet having spent six months explaining the benefits of Honda and the cars’ whole life proposition to the company – on the Civic it’s hard to disagree with the fuel economy which we have found out on our Honda Civic diesel.

“One of the things they wanted to achieve was sourcing buy British – and they were running a fleet of German cars. And Civic and CR-V are both Swindon built,” continues Leon. “To date we have delivered 12 new Hondas, all of which have been well received by the drivers.”

The deal with Yeo Valley is typical of how local dealers can properly supply company cars to SME small fleets.

Leon says he has 75 small business customers with an average fleet size of eight cars.

“The important thing for me is that I have a number of business customers who are into their third Honda – that bears testament to the eight years spent developing relationships.

“We support them with convenient after sales service. So we are happy to collect cars for service allowing them to focus on running their core business. We’re trying to make the Honda experience easy for them and convenient. And hassle free.

“We absolutely believe that our key to business success is getting bums on seats. Once they walk past the badge and appreciate the vehicle then it really does make a difference.