Thanks to CO2 emissions of 27-31g/km, the X5 falls into the 7% benefit-in-kind tax banding. Factor in combined fuel consumption of up to 235.4mpg and an electric-only range of up to 54 miles, and the X5 plug-in hybrid makes good sense both to drivers and fleet managers.

It delivers strong on-road performance thanks to its combined petrol/EV output of 286hp, yet can drive for up to 54 miles on electric power, resulting in zero tailpipe emissions and a usefully long range that ensures that, as a PHEV, it can deliver for fleets. 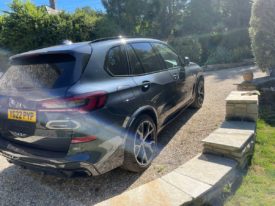 Those sort of numbers impressed the judges in this year’s Business Motoring large SUV award where the BMW X5 come out top of the class.

As already mentioned, it’s a big beast and to help keep it light on its feet, BMW has increased the battery size from the 9kWh in the previous generation models to 24kWh – hence the greater power and longer range.

It’s a heavy machine and the increased battery size has added to the weight, so while acceleration might not ne electric (if you’ll pardon the pun) it cruises around town, country and motorway very smoothly.

The electric motor produces 113bhp and along with the usual Sport, Hybrid and Electric modes there’s something called a new Anticipatory Hybrid Drive mode. This uses the sat nav to control what sort of drive should be used according to the road conditions. The electric motor also adds a booster when pulling away to mitigate any turbo lag which makes for a nice, smooth take-off.

As for the actual petrol engine, the 3.0-litre six cylinder is everything you would expect from a BMW six pot. Its smooth, yet packs a punch when you need it, hauling this SUV from a standstill to 62mph in just 5.6 seconds – and it’s all done with the minimum of fuss.

So fuel consumption. I always find it amazing that manufacturers can claim such wild numbers for PHEVs. BMW claims 188mpg but I challenge anyone to achieve that outside the strictest of test conditions. 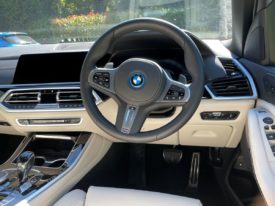 That said, the numbers aren’t bad depending on how and where you drive along with how well you keep the battery topped up. Theoretically, if you are just doing the average commute or school run (we keep being told this is around 30-miles for most people) and you keep the battery charged up, you may never need to call into a service station.

That said, I personally would go for something a lot smaller and cheaper as a runaround. The X5 is fully appreciated as a long distance cruiser in which case anything between 30- and 50mpg is possible.

While the name sounds pretty complicated, it’s not so when you are behind the wheel as BMW has done a good job in keeping things simple. Everything you immediately need is obvious before you need to dive down into the sub menus.

There’s plenty of room for five adults while the battery has not eaten up too much space in the cargo area. The cargo desk has been raised to accommodate the battery making the load height difficult, although BMW has mitigated this with an electronically-operated drop down lip.

As for the ride, it’s amazingly quiet – it’s as though the BMW brand has been taking lessons from Rolls-Royce, which, if course, the Group now owns.

There are the various driving modes from which to select although I always tend to leave it in the default comfort mode which does a great job in smoothing out the road surfaces.

Much has been made recently about BMW’s move towards subscriptions for various options and while this model weighs in at around £70,000 the add-on packs on our test model pushed the price up to £80,910.