This is the Advisory Fuel Rate for electric cars. Or, to use the correct HMRC term, Advisory Electricity Rate (AER). All current company car mileage rates can be found here: New company car business mileage rates.

HMRC advises that as long as the appropriate AER charge of 4p per mile is used for reimbursing staff for electricity in their fully electric car, there will be no taxable profit and no Class 1 National Insurance to pay.

However, unlike petrol or diesel company cars, HMRC says that electricity is not a fuel for car fuel benefit purposes.

Currently the Advisory Fuel Rates are used to reimburse business mileage without incurring benefit-in-kind taxation for petrol or diesel cars.

For drivers of hybrids HMRC says you should use the appropriate petrol or diesel rates depending on the fuel used by the engine.

The AER rates for electric cars will be welcome news to Business Motoring reader Chris Sullivan. 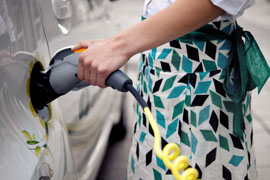 Use your private electric car for business and claim 45ppm

He contacted us to say he personally paid for the electricity that powers his Nissan Leaf company car – at 5p per mile or £400 per year – and couldn’t find an electric business car mileage rate to claim back his expenditure.

Now he can use the electric car company car business mileage rates to do so.