With the 1,000-mile mark recently passed, and after a month or so of familiarisation with the Skoda Superb Estate Business SE 2.0 TDi 150ps, the conclusion seems ever more clear-cut: the latest, sharper family design ‘language’ of Skoda works, and works very well indeed.

Walk around the Skoda Superb Estate Business SE – the test car in a subtle metallic “Business” grey – and there is no longer anything to suggest ‘budget’ about the styling and sheer presence of this most capacious of large estate hold-alls.

Nor does the interior disappoint. It might not shout the luxury of, say, a well-appointed Mercedes E-Class. But it is very far from disgraced. The dashboard and cockpit layout is clean, uncluttered and elegant. And for sheer, sprawling rear legroom; well, frankly, there is no rival in terms of overall size which can match it, however prestigious the brand.

There is no longer anything to suggest ‘budget’ about the styling and sheer presence of this most capacious of large estate hold-alls.

It’s when you look at the price list that warm feelings towards the Superb really start to stir. The entry-level,1.4 litre TSi petrol model costs just £20,260 on the road to a retail buyer. ‘My’ estate, propelled by 150ps two-litre diesel with six-speed manual box, has an on-the-road starting price of £23,755.

Its ‘extras’, including 17-inch alloys, heated front seats, bi-xenon self-dipping headlights and Smartgate telematics package, brought the total up to £26,515. But really, these were mostly self-indulgent fripperies.

The Superb Business SE has so much kit as standard  – from 6.5 inch colour touchscreen infotainment system with voice control to front and rear parking sensors, adaptive cruise control, even an integrated ice scraper in the fuel filler cap – that as a business tool it needs little else above the standard specification..

Before hitting the options list, a current (but soon to be replaced) Mercedes-Benz E-class estate, viewable as a competitor in terms of passenger and load space (maximum, back seats-down load spaces are identical at 1,950 litres) requires at least £10,000 more.

Yes, the Merc looks somewhat more prestigious, is beautifully built (Skoda impressively so as well), has a more sophisticated interior and a touch more power with its 2.2 litre, 174bhp Bluetec diesel.

But in truth, in opting for the Skoda  there is little to sacrifice in terms of style and form while pursuing what should  be the SME user’s prime pursuit: cost-effective function. When it comes to load haulers like these, then, it’s a valid question to ask how much value you really wish to, or should, put on a premium badge?

And the Skoda surprise if you want more

As for potential rivals measured by price, such as Ford’s Mondeo and Vauxhall’s Insignia, the like-for-like cost of the Ford stands £2,000 or more higher. The Insignia provides a closer price match – but neither car is in the same space league as the Skoda, with maximum load capacities of 1,630 litres for the Ford and 1,530 for the Vauxhall.

Nor does driving the Superb require anything much by way of compromise.

Yes, even in ‘sport’ suspension mode – there are also menu-selectable softer ‘comfort’ and ‘economy’ settings – it is more competent than enjoyably compelling. Using the sensible everyday ‘comfort’ setting, there is a faint hint of understeer and wallow when laden, and on those typical heaves and ridges of B-road Britain, the ride can be a shade unsettled.

But let’s be clear: it is still much on a par with the less-commodious A6 estate of Skoda’s more snooty sibling company, Audi.

The test car’s mileage has comprised roughly one-half semi-urban and urban short trips, and one 500-mile return run mainly by motorway to the Devon/Cornwall region.

Overall consumption has been 50.1mpg on an overall average speed of 33mph – a long way off, as ever, from the “official” combined figure of 68.9mpg but highly respectable for  such a large load-lugger nonetheless. The latter journey had been completed, and a further 140 miles added, before a visit to the fuel pumps was required. 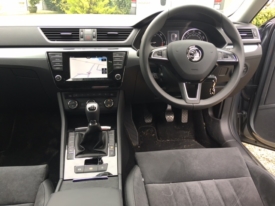 All mod-cons and buckets of space

I do not doubt that under favourable conditions more than 700 miles could pass between refills of the Superb’s 66-litre tank.

On that trip, the buckets of space available to five adult occupants became fully apparent. My 6ft 2in frame drove in complete comfort while behind me relaxed a 6ft 4in son – knees, as he reported, “nowhere even near” the driver’s seatback. Headroom, similarly, is generous.

For driver and passengers, the Skoda’s interior is a relaxing place to be. The engine is well-muted even under hard acceleration; the gearbox adequately slick. All that notwithstanding, the twin-clutch DSG automatic transmission option would probably be preferred by a high-mileage user. The 2.0TDi’s torque characteristics lend themselves well to it.

Gripes? Few and far between. Curse – as many initially have –  the satnav for not taking postcodes? Just touch ‘city’ then look for the tiny box saying ‘ptcd’ in the bottom left-hand corner. Problem solved.

Curse also – more justifiably – the stop/start system, which can cut itself out abruptly and inconveniently in first and second gear, low-revs manoeuvres. In the end I switched it off, ‘green’ conscience stirring faintly.

A USB socket for rear seat users would be welcome. Just occasionally, when lightly laden, such is the abundance of low-revs torque that wheelspin and accompanying driveline judder can set in rather too easily at broken- or poorly-surfaced road junctions.

But it’s hardly a long list, and the grievances mostly minor. The Superb, in short, puts up a startlingly compelling case for itself ; one in which its low price is a contributing, but far from only, factor. 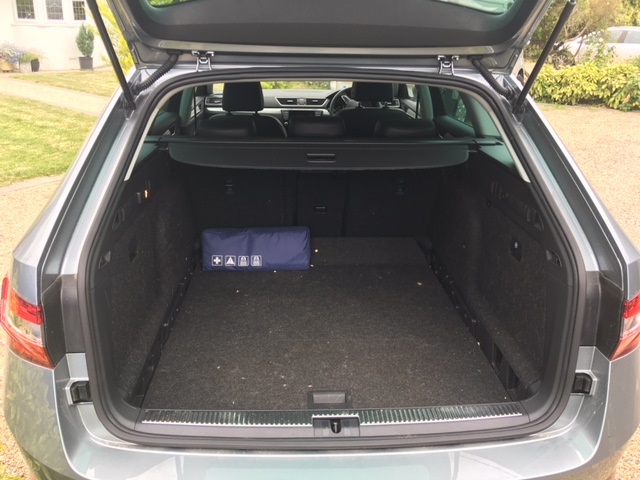