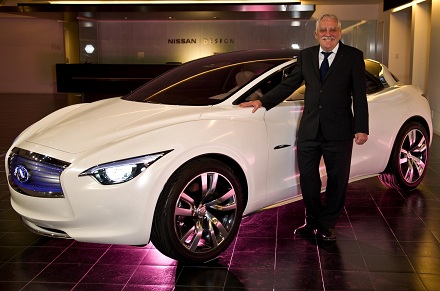 UK Nissan boss Colin Dodge with the Infiniti Etherea concept car – from 2015, they’ll be making something like this in Sunderland

BRITAIN already makes cars under more different badges than just about any other country but soon there’ll be a new one to add to the list – Nissan’s premium brand Infiniti.

A new compact car from Infiniti will be made at Nissan’s Sunderland plant from 2015 and, thanks to an additional £250 million investment, the factory will be capable of producing up to 60,000 of the new model a year. Around 1,000 jobs will be created.

Sunderland is already expected to produce over 500,000 cars for the first time this year, an all-time record for a UK car plant, so something will inevitably have to give in order to make way for the new model.

That something is the previously announced plan that the factory would make a Golf-sized Nissan hatch; that car will now be allocated to another of the company’s production sites.

The new Infiniti will be in competition with the likes of the Mercedes A-Class and BMW’s 1 Series. Rich pickings amongst business car buyers if the brand can gain popularity.

Colin Dodge CBE, Nissan Motor Co. Ltd Executive Vice President and Chief Performance Officer, said: “This milestone, our first premium product to be manufactured at Sunderland, reconfirms our commitment to UK manufacturing and the ongoing success of the plant, which is moving up the value chain.

“Just as important, the new Infiniti, which will be exported around the world, is being developed with help from our London design centre and our European Technical Centre at Cranfield.”

Infiniti has already shown a compact car in concept form, the hybrid Etherea, at the 2011 Geneva Motor Show – although it’s unlikely to carry that name into production as the company has just announced a new alpha-numeric naming scheme that will see all of its models badged with a Q or QX prefix.

The “Q” naming scheme harks back to Infiniti’s first car, the 1989 Q45, and the first model to get one of the new badges will be the Q50 saloon, which is due to be launched at next month’s Detroit Motor Show.

In itself, probably not – but the arrival of Nissan’s premium brand in the keenly contested compact class, where it will face the BMW 1-Series, Mercedes A-Class, Audi A3 and Lexus CT 200 h, probably will.