It’s a fully electric car and one with a range of almost 300 miles which rather puts paid to range anxiety – just like its e-Niro stablemate from sister brand Kia, this is a game changer.

It’s also a very comfortable and practical SUV, plenty of room for five adults – as long as they aren’t travelling with too much luggage.

The Kona Electric gets its range thanks to a large 64kWh battery, the likes of which only seen previously on more expensive EVs from Jaguar or Tesla.

There is also a 39Kw version available at around £8,000 cheaper but at the expense of range which comes down to somewhere between 130 and 150 miles. 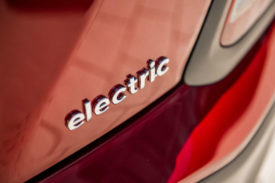 Why would you want to drive a Hyundai Kona? 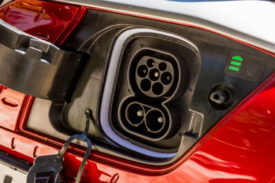 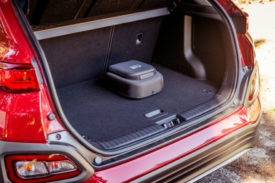 Verdict on the Hyundai Kona

In the early days of EVs, manufacturers were keen to justify their miniscule ranges by telling us that the average daily commute was less than 30 miles. A quick charge up at home or at work and bob’s yer uncle.

However, a range well short of 100 miles led to the term range anxiety and now those manufacturers are coming to the party with products that can not only take care of the daily commute or shopping trip, but take you on long distance business trips as well.

The Kona offers a lot of space against established rivals such as the Leaf or Zoe thanks to its SUV styling.

So, with a 125 mile journey ahead I was encouraged by the range indicator telling me that there were 273 miles ‘in the tank’. But it was still with some trepidation that we set off for the late night run – lights on and it was raining.

The trip was a mixture of 80-odd miles motorway and 45 miles on country roads. Add in some running around the next morning and the indicator showed we had used 150 miles of range while the actual distance covered for 143 miles – so pretty accurate.

What that did mean was that I now had 123 miles of range left while needed 125 to get home. So to the EV charging point in Sainsburys where the Kona was plugged in, and after downloading an app, the top up started.

However, a 3kw charger is not going to give  much during a 40 minute shop – around 2 miles actually. So, with the planned two overnight stop ,the Kona was plugged into the 240w household point.

Charging time 21 hours indicated! As it happened, over the two nights we got back our 273 miles range, although I’ve not seen the electricity bill.

Leaving aside the powertrain, the Kona is a very comfortable ride with very useful overtaking grunt on the motorway and the country roads.

EVs still have a way to go in terms of acceptance but the Kona is moving in the right direction.

What else should you know about the Hyundai Kona?

1 Buyers can also choose from a 3-cylinder 1.0 litre petrol or 1.6-litre four pot petrol engines as well as a 1.6-litre diesel.

2 Combustion engine models come with six-speed manual gearbox while the range-topping turbo petrol and diesels use a six-speed. There is also a dual clutch 7-speed automatic available.

3 Despite its impressive torque, surprisingly car companies tend not to certificate EVs for towing.

4 The Kona comes armed with a few tricks to help improve range and battery efficiency such as regenerative braking and an Eco Driving Assistant system which will alert the driver as to the best time to lift off the accelerator and coast towards a junction.

5 With entry-level SE trim and you get a 7.0in touchscreen infotainment system with a DAB radio and Apple Carplay/Android Auto smartphone mirroring. A larger 8.0in touchscreen and add built-in sat-nav with live traffic updates and wireless phone charging comes in on premium versions..