TIME to say goodbye to the Mitsubishi Outlander which has been on the Business Motoring fleet for the past six months.

It’s an important model for Mitsubishi in terms of engaging with SMEs and business user choosers, particularly now that the BiK band for plug-in hybrids has been reduced to 12%. Pity that the government has stopped the grants for PHEVs

How have we found living with it? Well, as a plug-in hybrid electric vehicle (PHEV) it gives you a great combination of economy and low company car tax thanks to its supplementary battery.

This allows the car to be driven in zero emission mode for almost 30 miles.

Our test vehicle was one up from the entry point to the Outlander PHEV line up  which came with heated windscreen and heated front seats – so there’s no excuse not to see out on frosty mornings while feeling toasty yourself (because there is also a heated steering wheel – utter bliss on chilly mornings).

Leather seats are standard as is the reversing camera which helps seeing what’s behind you in what is a big car. And once you’ve reversed and parked there’s an electric tailgate that takes the effort out of loading the boot.

But what we think is equally impressive are the numbers behind the luxury SUV.

For business motoring, the benefit in kind is…well, very kind!

Company car tax is from just £86 a month – or £172 if you’re a higher rate tax payer – for what is a luxuriously specified SUV with four-wheel drive. A Ford Fiesta 5 Door 1.0T EcoBoost Active X 125PS, which is half the Mitsubishi’s list price, costs a similar amount in company car tax: £81 a month.

The latest Outlander SUV is equipped with  larger battery and a new 2.4-litre petrol engine – up from 2.0-litres on the previous model.

This latest engine provides greater economy thanks to sophisticated switching between Otto and Atkinson cycle modes. You won’t notice the changeover except in your wallet thanks to the improved mpg.

The new engine certainly makes the Outlander extremely quiet and smooth to drive. In fact it’s impressively relaxed because of that.

And that’s definitely the way we like to drive the Mitsubishi. Go beyond unhurried and relaxed and the Outlander gets a bit flustered. Accelerate and the engine looks for higher revs and becomes all rather fussy.

But keep the Mitsubishi flowing along and it all remains highly refined. This is helped by the improved chassis stiffness introduced on the 2019 Outlander along with suspension tweaks.
It all means the Outlander PHEV makes a good fist of ignoring potholes and bumps in the road and maintaining an air of good natured composure. 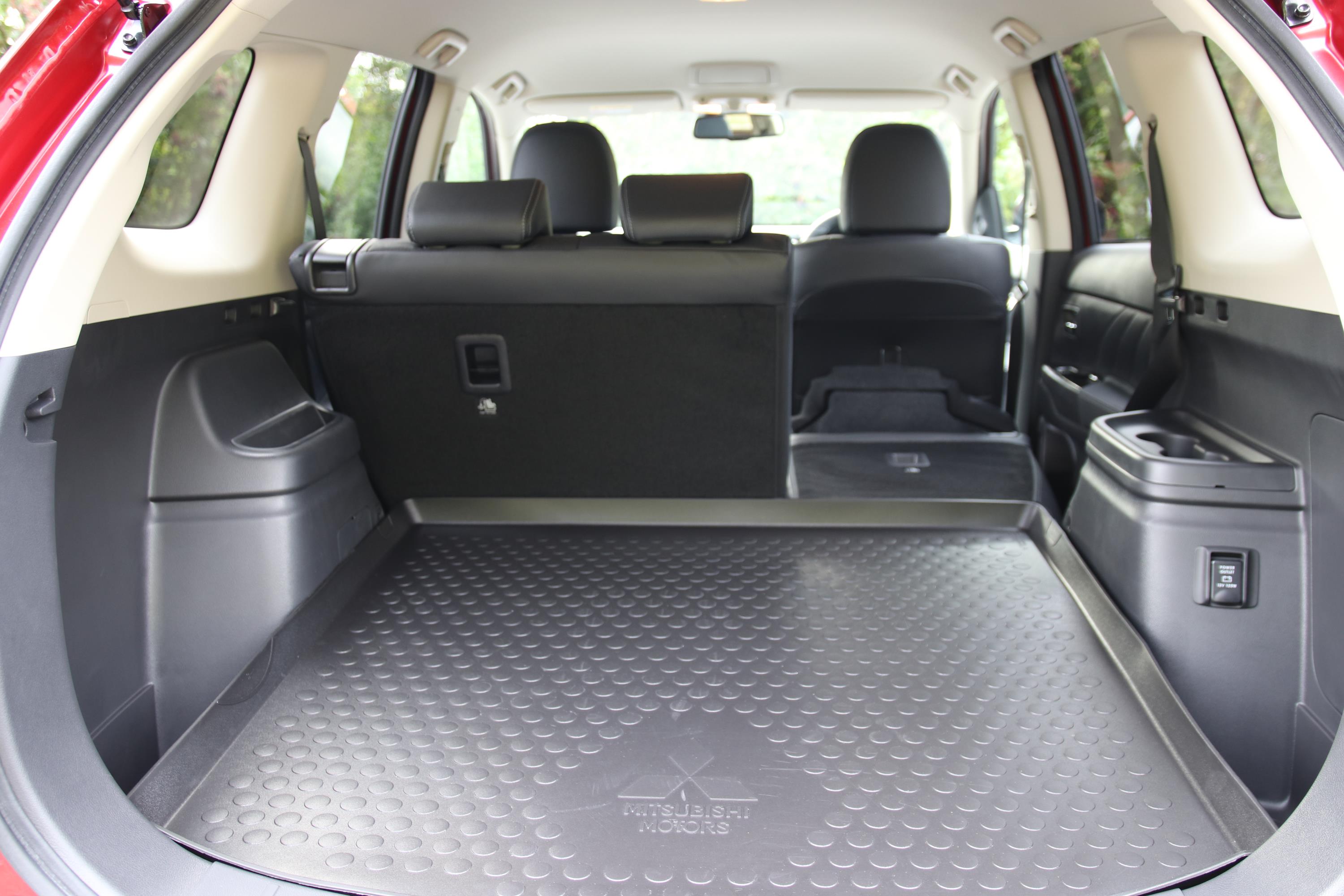 The battery range means if your daily commute is around 20 miles you will easily do this in full zero emission setting, wafting around silently and with that rather pleasing sensation that you’re not contributing to dirty air in your local area.

There is a switch on the central tunnel marked EV which ensures you stay fully zero emission to do this.

If the engine and battery have been updated, then the charging port has not. This remains a more elderly Type 1 socket. Not that it really matters.

We’ve been able to easily charge the Outlander’s battery using the home three-pin circuitry (no blowing of fuses and so on). The only time that we’ve not been able to charge the car was when the neighbour placed a pile of wood in the shared drive… We couldn’t get the car close enough to the mains.

However, the Outlander also has regenerative braking; instead of ‘wasting’ energy generated when you stand on the brakes, the energy is used to top up the battery instead. It’s effective too, allowing you to use ‘hybrid’ mode on longer journeys effectively.

If we have one issue, there do seem to be a lot of different buttons you can push which can seem a little overwhelming if you’re into just driving rather than engaging with the tech.

About the Author: Nick Ratcliffe