BUSINESS users looking for a competitive new C-segment crossover are hardly short of options these days. It’s a strong and evolving market which recently brought Renault into the frame with Kadjar. Here we are testing the Renault Kadjar Dynamique S Nav dCi 110 Auto EDC.

We first met the Kadjar last summer and liked its combination of space, style and comfort. Efficient, refined, it had plenty of appeal. And it seemed something different.

Now, we’ve the chance to see how it goes the distance as this striking metallic red Kadjar 1.5 diesel joins our Business Car Manager long-term fleet. One month in, 1,500 miles on the clock, the story so far?

OK, let’s kick off first with some terms of reference for the Renault Kadjar Dynamique S Nav dCi 110 Auto EDC.

To explain, that means this is a 1.5-litre diesel Kadjar (110ps) with Renault’s 6-speed automatic dual clutch box (EDC) on board and front-wheel-drive.

With Kadjar, there are four model grades. Dynamique S NAV is one up from base but still brings plenty of toys: dual zone air con, parking sensors, leather/cloth upholstery and R-link 2 multimedia system with 7-inch touch screen + sat/nav, to name but a few.

With £24,140 P11D value (and 20% BIK charge/£4,828), this is the spec likely best suited to UK business users, overall. It also comes with an enticingly low tax 99g/km rating for C02 emissions if you go for the manual box, thus making the Kadjar compatible for 100% capital write down allowance.

‘Our’ car, with the EDC auto transmission and 19-in alloys nudges that just over the line to 103g/km. Still good but not quite as lean and mean on the company car tax front.

Visually striking in its (£625 optional) Flame red metallic paint, HY16 MKJ arrived with just 137 miles on the clock, so of course needed careful running in thereafter. So very new and tight and for the first 1,000 kms, I was careful not to go over 3,000 rpm as per the instruction book. 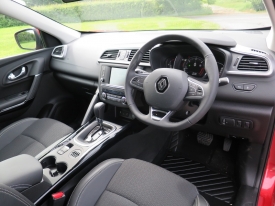 But instead of sticking to an arbitrarily low speed limit, I also made a point of driving at a range of different speeds day-to-day up (to that three grand limit) to help free up the engine.

First impressions: the 1461 cc four cylinder diesel really is super quiet (so much so, at one point, I wondered if Renault had actually delivered a petrol Kadjar by mistake). It’s a sizeable machine, the Kadjar, but the 1.5 packs good low down punch, is smooth and free revving so overall more than up for the job.

Another big plus is the driving position. You sit quite high up, the big screen affording a spectacular view out on to the road ahead. Renault is renowned for its soft, good looking seats and the Kadjar again hits the mark in that department. Yes, seat comfort is great.

I’ve already done a number of long drives in the Kadjar but always step out from the car at the end feeling fine and refreshed. So that lengthy 10-12 hour holiday run down to St Tropez this summer? Pas de problem…

Economy? So far, the Kadjar is averaging 52mpg. Decent enough, but of course some way off the 72.4 mpg combined official figure, as is almost to be expected these days.

As the car beds in, so the odd creak from the dashboard is one of the Spanish built Kadjar’s more interesting idiosyncrasies. The EDC auto box has some quirks of its own: the shift pattern occasionally a bit indeterminate at low range, almost like a CVT transmission. Maybe that’s still down to newness but let’s see.

To date, the Kadjar has been 100% reliable and in the visual department, certainly cuts a dash on those snazzy 19-inch Apollo diamond cut alloys. The trade off there is a slightly fidgety low speed town ride. While it’s a faithful handler, I confess the keen pilot in me would have sharper electric steering feel on my Kadjar wish list.

Overall though, the Kadjar is settling in well and already earning its stripes in a multitude of ways, from school run to people/luggage hauler to smooth, seamless motorway express. Once again, I really like the way this capable, comfortable SUV stands out from the crowd. Early days, but the Renault Kadjar is off to a good start. 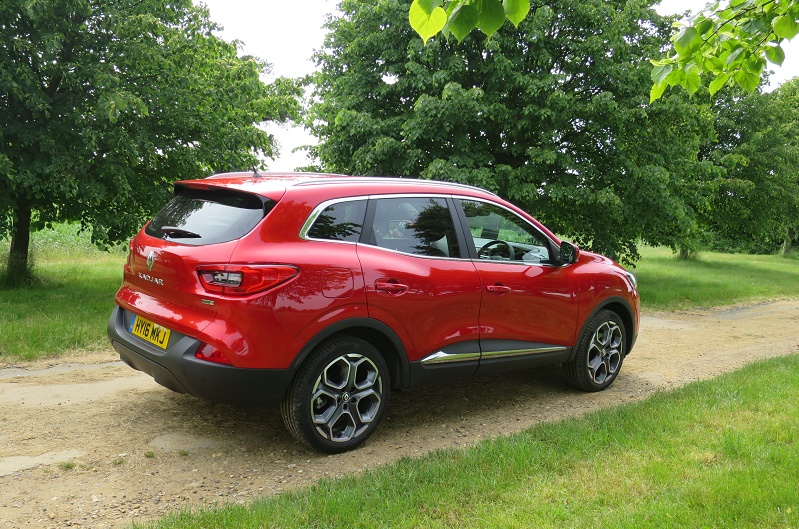