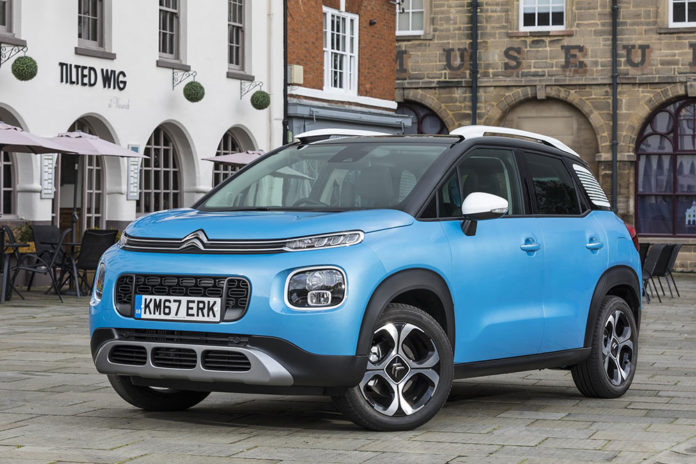 Crossovers and SUVs are the biggest sellers on the market these days and they come in all shapes and sizes.

You don’t have to go big to get a lot of space as illustrated by the winner of the Business Motoring Best Small Suv category, the Citroen C3 Aircross PureTech.

There’s lots to choose from in this category but what made the Citroen stand out in the eyes of the judges is practicality as well as plenty of scope for personalisation to add to its already distinctive looks.

The C3 Aircross replaces the C3 Picasso small MPV and manages to have as much space. There is a range of colour options, contrast roof colours and different interior trims on offer.

Power comes from a 1.2-litre three-cylinder petrol engine in 82hp, 110hp and 130hp guises. The two lower powered engines get a five-speed manual gearbox as standard.

While it wears a British badge, the Vauxhall Crossland X is actually based on the same under pinnings as the Citroen C3 and also uses PSA engines – a 1.2-litre petrol and a 1.5-litre diesel.

The Vauxhall does have a higher starting price than some of its rivals such but this is mainly because the entry-level version is equipped to the same level as those cars are in mid-spec form. PCP and leasing costs are higher than many rivals.

CO2 emissions for the petrol engines are good, even if the relatively high purchase price pushes the benefit in kind cost up for business users.

The 1.5-litre diesel also has low CO2 emissions, which should make it more popular with company car buyers.

Arguably the Nissan Juke was one of the vehicles that started the trend for the ‘bigger’ small car in SUV form.

It’s success against many rivals is down to its very distinctive looks, which also tend to polarise opinion.

While generously equipped the Juke is more expensive than most of its rivals but it’s best in class when it comes to hanging on to its value which should mean lower monthly payments on a PCP.

The 1.2-litre turbo petrol and 1.5-litre diesel in particular are reasonably economical although none of the versions fall below the 100g/km barrier that would make it VED-exempt.

Based on the popular 208 the Peugeot 2008 offers plenty of engines and trim options and it is competitively priced against many of its rivals.

If you are doing a lot of town driving the the 1.2 petrol is a good choice, well priced and cheap to run with CO2 emissions below 100g/km in tandem with Peugeot’s EGC automatic gearbox.

Company car drivers, however, should be interested in the 1.6 BlueHDi, which emits the least CO2 of the whole range. It’s more expensive but best for high mileage users.

There are some extremely attractive finance offers on the 2008, and running costs such as insurance, road tax maintenance are very reasonable.

The Renault Captur has been a big success for Renault and has become the brand’s most popular car in the UK.

It manages to cut the mustard against its small SUV rivals while retaining its own personality rather than being an overblown version of a smaller car.

There are also high levels of personalisation available while the Captur is good value, undercutting most of its rivals on purchase price and offering some of the lowest CO2 emissions in its class. T

The 1.2-litre petrol will cost you more in company car tax, fuel and depreciation than other models in the range while resale values are similar to those of most rivals.