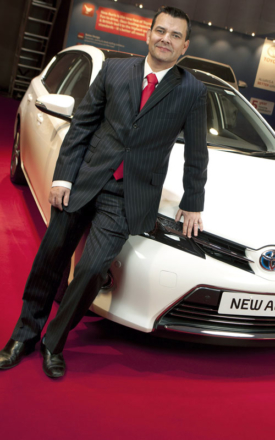 TOYOTA is putting its sales focus to company car drivers on its low emission hybrid technology.

The latest Toyota hybrid is the new Auris, which went on sale on December 02.

“We believe government needs revenue and we’d be surprised if it’s not through taxing other engine emissions – such as NOx (nitrogen oxides) and particulate matter (PMs) – in addition to CO2,” said Toyota’s newly appointed general manager of fleet.

“When we started with the Toyota Prius it was not mainstream,” said Neil.

“We’ve gone from there to being a mainstream player with hybrid technology, so we have to push hybrid and its benefits as far as we can, particularly with small businesses and SME fleets which car realise low cost of ownership benefits.

“We don’t have badged-up eco models, either – all our cars have lower CO2 emissions. And with our new hybrids you’re getting the same car, but a different choice of powertrain.

“In terms of pricing the new Auris Hybrid costs £1500 more than the 1.6 petrol Auris, but once you take into account the £1000 premium for the auto box, there’s only a £500 uplift – plus you get the all the hybrid benefits.”

Later this year, Toyota will launch an estate version of the Toyota Auris, called Touring Sports. “It will be a real winner, especially with the hybrid power train,” said Neil. “There’s no difference in load capacity compared to the diesel or petrol models because we’ve packaged the battery so well.”

The Toyota Auris Sports Touring is 285mm longer than five-door hatchback, with increased luggage space. Business car managers interested in the Auris estate for their company car drivers should note that the car goes on sale in July 2013. 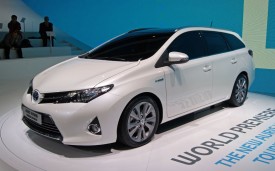 The Toyota Auris Sports Touring, which will feature a Toyota hybrid drivetrain, was revealed at the Paris Motor Show in September. It goes on sale in the UK in July 2013