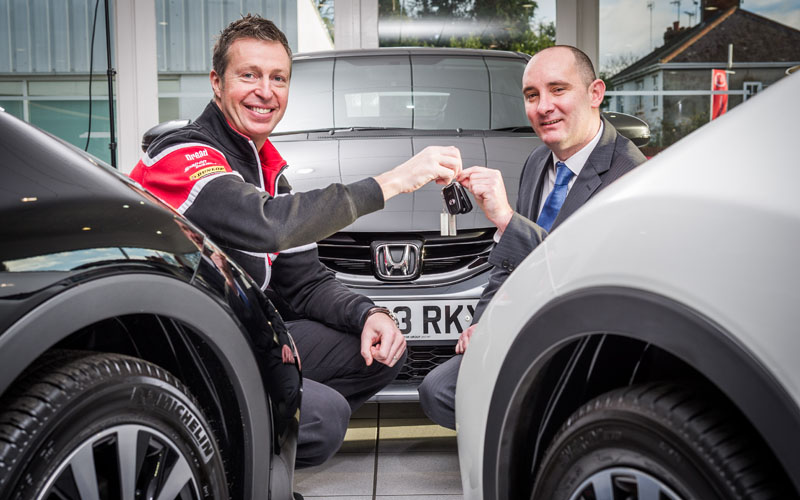 Picking the Hondas was an easy task for Euan Allison, Group Managing Director of Forester Life, as he comments: “We have bought Honda Civics in the past and, after trying some other premium brands in the interim, are pleased to welcome Honda back to the Forester fleet.”

If you’re considering premium hatchbacks for your small business, there are five reasons why the Honda Civic should make your shortlist.

The Honda Civic 1.6 i-DTEC diesel is one of the most efficient cars in its class. Go for the mid-range SE model, which includes 16-inch alloy wheels, climate control and electrically adjustable heated door mirrors, and you’ll benefit ultra-low company car tax.

Even higher rate payers only face a bill of £1257 per annum. It’s one reason the Civic was named best Company Car to Buy in our SME Company Car of the Year Awards.

All Honda Civic models fitted with the 1.6-litre i-DTEC diesel engine can manage up to 78mpg. Not bad for a car that’ll accelerate from 0-60mph in just over 10 seconds and top out at 129mph. The standard six-speed manual gearbox keeps fuel consumption down on the motorways, while the stop-start system means it’s cheap to run in town, too.

With CO2 emissions of just 94g/km – the Honda Civic diesel is one of the cleanest cars on the market – let alone in its class. The greenest BMW 1 Series and Audi A3s both emit 99g/km of CO2 – and the Audi is actually slightly slower to 60mph.

Being in VED band A translates to a shockingly low BIK rate for company car drivers. With a company car tax band rate of just 14% in the upcoming 2014 tax year, the Honda Civic will cost surprisingly little in company car tax. Perfect for those looking to keep a lid on costs.

As well as all the financial benefits, Foresters can sit proud knowing they’re contributing to the British economy – the Honda Civic is built in Swindon.

The new Civics are being being supplied to Forester Life through the Marshall Motor Group – the largest Honda retail partner in the UK – with the arrangement brokered on behalf of Foresters by Marshall Leasing.

To celebrate the delivery of the first five cars, Dunlop MSA British Touring Car driver, Matt Neal (pictured), handed over the keys to Foresters staff at Marshall Honda in Narborough, Leicestershire on 9 January. Topical, it seems, considering Matt has enjoyed success with Honda over seven BTCC seasons since 2003. Last year the BTCC Honda Civics secured both the teams’ and manufacturers’ titles for the fourth year in a row.

More on the Honda Civic 1.6 i-DTEC

The Civic has just had a bit of a facelift. Click here to read our full review of the latest model.